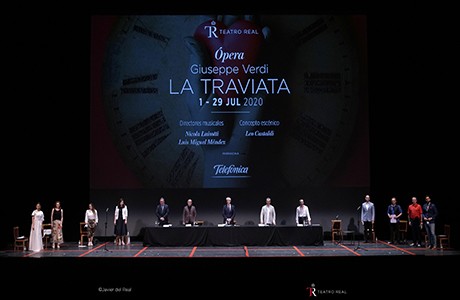 La traviata, from Giuseppe Verdi, It was planned for this season ─with the famous production of the Salzburg Festival directed by Willy Decker─ in two periods: of the 9 a 24 of May (10 functions) Y of the 7 al 19 of July (9 functions).

Due to the state of alarm decreed by the Government of Spain, May performances could not be performed, reason why the Royal Theater is trying to relocate in July the people who had bought their tickets for those dates. parallel, viewers of the July shows affected by the restriction of capacity will be relocated, what will be 869 locations, in compliance with health safety regulations.

Of the 19 scheduled functions has been passed to 27 with reduced capacity, to be offered of the 1 al 29 of July (he 6 and the 20 July there will be no show), with four different deals in the interpretation of the leading trio: like Violeta, las sopranos Marina Rebeka, Ruth Iniesta, Ekaterina Bakanova, Lana Kos Y Lisette Oropesa; as Alfredo Germont, tenors Michael Fabiano, Ivan Cordoba, Matthew Polenzani Y Ismael Jordi; y like Giorgio Germont, baritones Artur Ruciński, Nicola Alaimo, Luis Cansino Y Javier Franco.

Due to the mobility restrictions caused by the coronavirus crisis both in Spain and in the various countries of origin of the singers - who traveled from the United States, Austria, Croatia, Italy, Latvia, Poland, etc.─, rehearsals have started on 19 of June with all the soloists, except for the soprano Lisette Oropesa, that will arrive in Madrid on 13 July to participate in the final performances of the opera.

Together with the soloists, the Headlines Choir and Orchestra of the Teatro Real, under the direction of Nicola Luisotti, who will direct his fifth Verdian title at the Teatro Real ─after The Troubadour (2007), Rigoletto (2015), Aida (2018) Y Don Carlo (2019)- and he will return in September with the sixth, A masked ball, which will open next season.

The production of La traviata that will be offered throughout the month of July will no longer be the one that was announced, By Willy Decker, since the singers, choir and orchestra must comply with current health safety guidelines.

To present a version of the opera that respects these rules and can be performed with just 10 rehearsal days, wardrobe and characterization tests, stage director Leo Castaldi has devised a semi-staged concert version, in collaboration with the illuminator Carlos Torrijos and the Teatro Real technical team, using elements of props, wardrobe and characterization from the Theater collection.

Starting precisely from the forcefulness with which the safety distance is getting between us, Leo Castaldi has conceived a ‘scenery’ marked by a grid of squares of 2 by 2 meters drawn on the ground and projected onto the walls of the stage, Psychologically 'imprisoning' the characters in their limited spaces. The soloists, they will keep a minimum distance from 2 m. among them will move in 100 m2, sharing the stage with him choir, which will occupy 260 m2, and with the inner band (group of 16 musicians who plays on stage), what will you use, during his performance, 60 m2.

To unify and unite the dramaturgical proposal without a previous costume design or material time to carry it out, Castaldi has chosen to create an atmosphere vintage, mid-20th century, in which costumes from the Theater and from the performers themselves and elements of props from the same period.

At pit, with its maximum dimension of 140 m2, the orchestra will be with the full score template for performance of La traviata: 56 musicians will play with mask, individual lectern and with 1,5 m. away from each other. Wind players will have methacrylate panels strategically placed in front of their instruments. On stage the internal band will play with 16 teachers.

So that musicians can have rest days between 27 functions, the Head of the Royal Theatre Orchestra will unfold in two touching each formation for periods of 3 consecutive days.

He Titular Choir of the Teatro Real, with 51 singers, will perform the opera on stage, which will allow the optimization of the sound, despite the safety distance of 2 m. among its members. They will occupy an area of 260 m2, with about 24 m. wide by 11 m. background.

La traviata will be presented at the Teatro Real in the unique context that we are all experiencing. The opera will be presented with fewer rehearsals than normal and with a stage proposal designed to adapt to the circumstances. All the Teatro Real team, as well as the artists and the Principal Choir and Orchestra, take on the challenge with a huge sense of responsibility, a lot of imagination and a great illusion to take another step towards the normalization of artistic life, encouraging the public and citizens to face the new reality in which we find ourselves with encouragement and a positive spirit. yes, everything will be done scrupulously respecting the guidelines of the health authorities of the Government of Spain and the Community of Madrid.

Telefónica, main technological patron of the Teatro Real, drives its digital development and the best connectivity to optimize the experience of opera fans on all the digital channels of the Theater. In these years, Telefónica has expanded the number of functionalities and services on the web, reinforcing the interactive and communication with users. In this way, It has allowed the creation of a much broader catalog of products - encompassing different types of music- and accessible, with services more adjusted to the preferences of the followers of this institution. A further step within this global project has been My Opera Player, digital platform that allows opera lovers, dance and classical music enjoy from home, with just a click, of the best internationally successful productions.

Who: the SGAE Foundation will program a cycle titled Female models in which they will be projected I am the Juani by Bigas Luna and No one wants the night Isabel Coixet. Two films about women who, as Violetta Valèry, they have transgressed the “feminine roles” to which due to their social condition and / or historical moment they were doomed.

Exposition: within the initiative a work, an opera, The Museum will exhibit a wonderful illustrated edition of 1857 from The Lady of the Camellias, the novel that inspired La traviata. Thus, the public that visits the rooms will be able to see this printed jewel that is kept in the Museum's library.

From 10 of July | Lazaro Galdiano Museum

Audio guide: Lázaro Galdiano offers the Royal Theater public the possibility of downloading an exclusive podcast with which they will learn about the stories and legends that surround some of the women who are represented in their rooms. Women who, as the protagonist of La traviata, they fought against the destiny that they drew for them. Download code request at educación@museolazarogaldiano.es