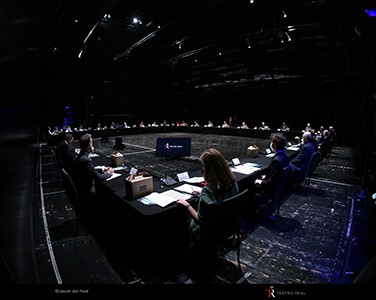 The Royal Theater held this morning's second session of the Board of Trustees this season, in which the programming for the Season has been approved 2020/2021, which will be presented tomorrow, and important appointments have been announced at the proposal of the president of the Board of Trustees, Gregorio Maranon, who has reiterated the importance of "Civil society support for the artistic and cultural project and this public institution. These appointments constitute a reinforcement to face the challenges of the first cultural institution of the performing and musical arts in our country ”

Assume the vice presidency of the Board of Trustees The Royal Theatre, Helena Revoredo, President of the International Council of the Royal Theater and President of the Prosegur group. Likewise, joins the board of trustees, at the proposal of the Minister of Culture, the vice president and CEO of Banco Santander and member of the Board of Protectors of the Teatro Real, José Antonio Álvarez

Writer and academic Antonio Muñoz Molina is the new Chairman of the Advisory Council, position he held Mario Vargas Llosa, who will show, from now on the honorary presidency of said organ, and will continue to be a Patron.

For the presidency of the Board of Protectors, has been named Claudio Aguirre Pemán, President and founding partner of ALTAMAR. The until now president, Alfredo Sáenz Abad, happens to be honorary president of the same.

In the Board of Friends The Royal Theatre assume the presidency Jesus Maria Cainzos, from which he was vice president until the recent death of his predecessor in office, Alfonso Cortina. Myriam Lapique, will hold the vice presidency.

These appointments, approved by the Board of Trustees, reaffirm the involvement of civil society in supporting culture and the Teatro Real. The personal and professional career of the people who occupy them, they mean a guarantee of prestige.

The session began with a minute of silence in memory of all the victims of the pandemic. There was a special memory for Alfonso Cortina, president of the Board of Friends, Y Carlos Falcó, member of it, both died of the coronavirus.

The director-general of the Royal Theater has informed the Board of Trustees of the work carried out and of the measures adopted for the reopening of the Theater next 1 of July. Also of the commitment of the workers with the Royal Theater and of the declaration of exceptional public interest of the event ”Teatro Real, near you. Opera social outreach program”. It has been highlighted, also the enormous growth of My Opera Player as an opera dissemination platform that has reached more than 50.000 users.

The artistic director, Joan Matabosch, has presented the season 20/21, operatic, dance and concerts, highlighting 15 operas, of which 7 are new productions of the Teatro Real, which will be presented to the media tomorrow.

They have attended the meeting, María José Gualda, Secretary of State for Budgets and Expenses of the Ministry of Finance; Javier García Fernández, general secretary of Culture of the Ministry of Culture and Sport; Andrea Gavela Llopis, Undersecretary of Culture and Sports; Enrique Osorio, Minister of Education and Youth of the Community of Madrid; Amaya by Miguel Toral, general director of INAEM; Gonzalo Cabrera Martín, general director of Cultural Promotion of the Community of Madrid and Andrea Levy Soler, delegate of the government area of ​​Culture, Tourism and Sports of the Madrid City Council.