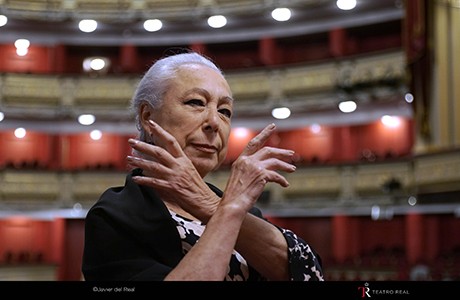 The next 25 October the Royal Theater opens the second season Real Flamenco, consolidating the presence of flamenco in its Ballroom, with a broader and more diversified programming.

This second edition is a tribute to the great flamenco dancer, coreógrafa, actress and teacher Cristina Hoyos, Spanish muse of dance in recent 50 years. Their influence may be paid in several of the young dancers who will participate in the programming cycle.

Another big name Spanish dance, Sara Baras, will accompany the cycle in this second season, as well as Antonio Canales He was present at the last edition, closing it with a performance last July.

Of the 18 shows last season has passed 30 in this, the performances Friday evening, instead of Wednesday, they will be among the proposals a weekend in Madrid.

This second edition Real Flamenco, with artistic direction and production SO-LA-NA, It shall consist of 30 singing and dancing shows featuring renowned artists, They are representing different families, schools and schools of art deeply rooted tradition, but permeable to the personality of its various interpreters. As an example of this diversity we could quote Eduardo Guerrero, Lucia Alvarez 'The Piñona', Marco Flores, Amador Rojas or Antonio Canales.

He Dance room will again host Real flamenco shows throughout its entire season, enriching the mythical space with the Spanish artistic heritage, within the framework of the policy of opening to the Royal Theater styles and different languages, promoting dialogue between different forms of expression.

He public can access the Ballroom of the Royal Theater a from the 20.30 hours, schedule that will open the Street Gate Felipe V.

Between the 20.30 and the 21.00 hours Attendees will be greeted with the Spanish wine tasting of the winery Juan Gil, Real Flamenco collaborator since its launch. The performance will take place at 21.00 hours and at the end thereof, viewers who wish may enjoy the company of artists and get close so, personalized way, the world of flamenco. The sponsoring companies Real Flamenco in its second edition are: Grupo Ership, Herbert Smith Freehills, Juan Gil, Land and Group Leader Index, along with other large companies to be incorporated as sponsors throughout the season.