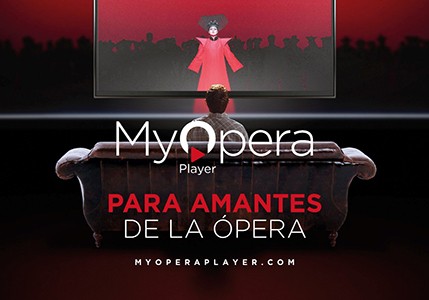 Given the situation of health warning that Spanish society is living and forcing citizens to remain confined to their homes, he Teatro Real wants to help make these difficult days more bearable sharing with everyone what you do best, music, theater Opera.

For that, makes available to the public in Spain, from tomorrow, Wednesday 18 of March, totally free, its video platform “My Opera Player”, where you can enjoy all operas, dance and concerts and offers in its catalog that will be added in the coming days, recorded in the link www.myoperaplayer.com and enter code OperaEnCasa.

All titles, In addition to representation, They include interesting interviews with directors and actors, information and reports work, all of them free access.

In the coming days will be uploaded to the platform the following titles:

“My Opera Player” It is a project led by the Teatro Real of which they form large part opera as Gran Teatre del Liceu, he China National Grand Theater, he Colón of Buenos Aires or the Teatro San Juan Bicentennial of Buenos Aires.

With them, major cultural centers of our country as National Heritage, it brings recordings of the concerts held in the Hall of Columns of the Royal Palace; Spanish TV, you have selected great moments of its historical archive musical, and the Albéniz Foundation, with some of his concerts.

"May Opera Player" was launched by the Royal Theater in November 2019, and he has counted, with technological participation Telefónica Y Samsung, and sponsorship Endesa.

For any information or clarification on “My Opera Player”, there is a service to the viewer that is available via email soporte@myoperaplayer.com