The Royal Theatre and the younger audience 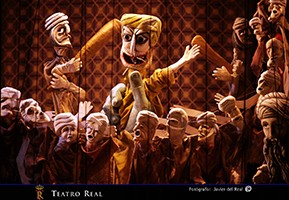 He Teatro Real continues its journey, once the season starts 2015-2016 opera and dance, to give way to activities and shows for the little ones, with proposals that include operas, concerts, puppetry, stories and workshops, In addition to the continuity of the cycle All the Gayarre, one Sunday of every month.

Tales of always and never opens the first door to the fantasy of the Season. A pleasant way of telling and “seeing” music, in which narrations and projections are intertwined in a crazy way, accompanied by a violin, a cello and a piano “with their own life”. Directed and presented by Fernando Palacios, the show is divided in two: tales on the ropes (17 Y 18 October, 12.00 Y 17.00 h) and Tales inside a keyboard (24 Y 25 October, 12.00 Y 17.00 h). Music of Ridout, Satie and Palacios himself, for an activity designed for children from 7 years.

The opera has a prominent place in the Pedagogical Program with the premiere of three new productions: Dido & Eneas, a hipster tale; The enchanted flute and Brundibár. The beautiful work of Henry Purcell, Dido and Aeneas, has been revised by the playwright Rafael R. Villalobos to tell this love story in an updated way, jealousy and friendship, feelings so linked to the transition from childhood to adolescence, that will invite both enjoyment and reflection from a more modern and closer point of view for young people from 9 years onwards. December will be the month of the new baroque.

The magic flute Mozart becomes The Enchanted Flute, a story in which the voice of a narrator, Pilar Massa, a string quintet and some fun projections, reveal to the little ones the adventures of Papageno and his friend Prince Tamino, when they went to distant lands to rescue princess Pamina. A story full of surprises for the little ones, from 4 years.

The Royal Theater will present in the month of April Brundibár, Czech composer's work Hans Krasa, composed 1938, but released in 1942 in an orphanage for Jews in Prague, in the middle of world war. Krása could see it represented until 55 times by the children of the Terezin concentration camp, before his transfer and death in Auschwitz. A play for children, sung mostly by children, that for these special circumstances is considered as a song to peace and solidarity.

The puppet company Etcétera returns to the Real with its magical show El retablo de Maese Pedro, tribute to Cervantes Y Failure. Made with giant puppets, faithfully inspired by the original premiered in 1923 and staging with the resource of the theater within the theater, fiction and reality are mixed in a unique proposal. in this beautiful way, the Royal Theater joins the commemorative acts of the IV Centenary of the death of Miguel de Cervantes.

Once a month, always on sunday, Introductory music workshops will take place ¡Todos a la Gayarre!. An activity in which all spectators have a place, of all ages, to reflect in a playful way on the titles and composers that make up the program of the opera season. In sessions of 12.00 Y 17.00 h

The University on Stage continues on its way, pioneering program, since its creation in 2010, has allowed more than 6.000 students of 20 universities and schools of artistic education discover the Royal Theater from the inside. technical visits, meetings and debates with artists and theater professionals, exceptional attendance at rehearsals are key moments of each course. Which students receive college credit in their studies- actively involved with work analysis and evaluation of the Royal Theater productions, and perform an academic teamwork, followed by an oral presentation and discussion.

More information about the program and activities of the Theater on the website www.teatro-real.com.

TALES OF ALWAYS AND NEVER

Festival of narrations with projections

1. tales on the ropes

2. Tales inside a keyboard

A love story, friendship and jealousy, from the opera by Henry Purcell

THE ALTARPIECE OF MAESE PEDRO

Youth Orchestra of the Community of Madrid (JORCAM )

Pedagogical concert with projections and string quintet with narrator, from The Magic Flute of W. A. Mozart

Music by Hans Krása and libretto by Adolf Hoffmeister

Adaptation made by Susana Gómez

Soloists of the Little Singers

Youth Orchestra of the Community of Madrid (JORCAM )

She is beautiful, but, watch out, can turn into cockroach

He loves his daughter so much that he keeps her hidden at home.

(Parallel activity to The Magic Flute)

V. The carnival of lies

We take advantage of Valentine's Day to ban love

(Parallel activity to The prohibition of love)

WE. spring has come

The intense colors and the buzzing of insects arrive

(Parallel activity to The Rite of Spring)

Monsalvat, the mountain that hides many secrets

In the desert, the brothers Moses and Aaron assemble a mess

(Parallel activity to Moses and Aaron)

(Parallel activity to I Puritani)