The Teatro Real and the Teatro de La Abadía co-produce the world premiere of Marie, by Germán Alonso and Lola Blasco 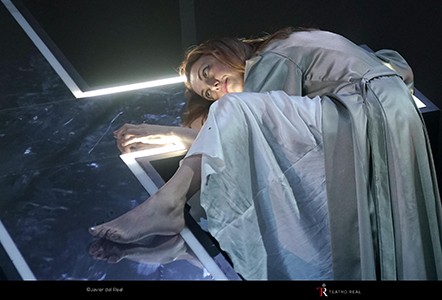 The next 9 from January will take place in the Theater of the Abbey he World Premiere from Marie, ‘Contemporary tragedy’ that arises from the collaboration between three renowned artists born in the 80: the composer from Madrid Germán Alonso (1984), the Alicante playwright Lola Blasco (1983) –National Prize for Dramatic Literature, 2016- and the Sevillian stage director Rafael Villalobos (1987) –Arts and Letters Award from the Princess of Girona Foundation, 2019.

The production - the first collaboration between the Teatro Real and the Teatro de la Abadía - proposes an investigation into the murder of a prostitute at the hands of her partner through the story of several characters and the author's reflections, that analyzes homicide from different perspectives, giving visibility in Marie to all Marie, forgotten and nameless victims who constitute the axis of the tragedy.

THE GENESIS OF THE WORK

The stage manager Rafael Villalobos, impressed by the musical potential of the playwright's texts Lola Blasco -Who have you worked with since you met at RESAD (Royal School of Dramatic Art of Madrid)- prompts you to write an operatic libretto, introducing the composer Germán Alonso, who had already premiered his first chamber opera, The Sins of the Cities of the Plain.

Lola Blasco proposes to both the creation of a work that investigates the character of Marie in the work Woyzeck, from Georg Buechner (1813–1837), whose homicide, at the end of the original drama, It is treated just like the epilogue of the unfortunate life of the protagonist, humiliated, used and reviled by all, generating in the public an empathy so great that the murdered woman goes almost unnoticed.

With the support of the BBVA Foundation, that awarded Lola Blasco one of its Leonardo Scholarships to Researchers and Cultural Creators, the playwright was able to write the opera libretto in close collaboration with Germán Alonso and Rafael Villalobos.

An author - alter ego of Lola Blasco, whose reflections appear in the work recorded with his own voice - he intends to write an opera libretto focused on the reasons that led soldier Woyzeck to murder his partner. Spinning his meditations, intuitions and conjectures with the statements of the various witnesses, reconstruct three different scenarios for the same crime.

In the dramatic structure of the play, conceived as a way of the cross of the protagonist, three planes intertwine, corresponding to three times and three different languages: the present, with the author's reflections while investigating the murder (electronic engraved text); the remote past, with the memories of the characters who have lived with Marie (theater); and a 'revived time', with the triple recreation of the murder scene (operatic language).

For the construction of the characters Lola Blasco has scrutinized not only the drama of Büchner, but also operas Wozzeck Y Lulu by Alban Berg, the literary myths of Otello a Carmen, from the Bible to Goethe, that appear explicitly or hidden in the future of the drama.

The sung parts of Marie they are written for countertenor and soprano, –Xavier Sabata Y Nicola Beller Carbone (Jordi Domènech Y Valentina Coladonato, he 10 from January)–, whose voices are used in all their registers: natural voice, imposed and vocal fry.

In addition to electronic music and prerecorded texts with the voice of Lola Blasco that appear throughout the work, the score assembles different musical sources, from baroque to rock and electronics, in a fluid sound osmosis that highlights the use of elements from Alban Berg's operas and quotes from recognizable or submerged themes that have inspired the composer.

In his second stage work, German Alonso retell the ensemble OCNOS Project, this time with Diana Muela (flute), Olga Morral (accordion), Pedro Pablo Chamber (saxophone), Gustavo A. Dominguez Ojalvo (bass clarinet) Y Pedro Rojas Ogáyar (electric guitar), who use all the potentialities of their instruments at the service of dramaturgy.

Starting from opera as a genre intrinsically linked to Greek tragedy, understood as an amalgam of artistic expressions with a vocation to become a social tool, Rafael Villalobos raises production based on a work of registered person, that explores the vocal and physical limits of the performers while delving into the concept of the sublime, placing beauty as the main channel of communication with the public.

The play, articulated like Marie's Stations of the Cross –with her three deaths that emulate the three falls of Christ– takes place in a symbolic space specifically designed for the arches of the Abbey Theater by Emanuele Sinisi. Chaired by a versatile and omnipresent cross, with the accomplice lighting of Felipe Ramos, helps the metamorphosis of the various characters that enter and exit along the 14 'Stations' of the tragedy.

Avoiding the moral and any space-time anecdote, the production aims to provide a space for reflection on gender violence, in which the public, situated in front of a complex reality, is confronted with the tragedy of Marie, of so many Marie, with the unspeakable and profound mediation of Art, the conjunction of all the arts.