The Royal Theater and Luis Piedrahita celebrate Beethoven with the family 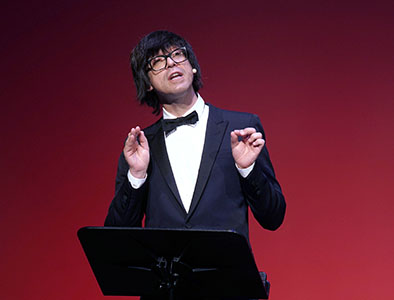 the versatile Luis Piedrahita writes and stars in a show about the German composer in which, with wisdom and humor, brings the power of his music closer to all viewers.

the conductor Lucia Marin Debuts in Teatro Real with music Beethoven, in front of the Youth Orchestra of the Community of Madrid.

The stage of the Real will become a peculiar building thanks to the drawings by Pablo Morales del Río that, with animation by Iñaki García, they will come to life discovering the neighbors who inhabit it.

The website of the Teatro Real makes available to the public a didactic guide with detailed information about the show.

Next Saturday, 30 of April, he Teatro Real will celebrate the beautiful tribute to 250 birth anniversary Ludwig van Beethoven that the confinement left frozen and that now, Hand Luis Piedrahita, responsible for the script and interpretation, will fill your main room with music and emotion with the show ¡A la bin! to the ban! To Ludwig Van! ¡Beethoven, Beethoven and no one else! , for all audiences.

The ingenuity and the word of Piedrahita will be accompanied by an artistic team led by the orchestra director Lucia Marin who, in front of the Youth Orchestra of the Community of Madrid, will perform fragments of some of the best-known works of the German composer.

This is the story of Beethoven's neighborhood community. A kind of 13 Barnacle Street from the 18th century. Each of the inhabitants of the house has their problems: the upstairs neighbor lives with seven unruly cats that destroy her furniture, in the attic lives a poet who fights against the roof leaks, below, a mother who cannot sleep her child and even an agricultural expert who tries to feed the first vegetarian carnivorous plant in history. When the teacher rehearses, the music filters through the walls and the problems of the neighbors become bearable. Until suddenly… a fire breaks out in the building!!

Spectators will walk through the different spaces of this imaginary building, a crazy neighborhood designed by Paul Morales del Rio, with animations of Inaki Garcia, in which the music of Beethoven produces a particular… effect. a little madness, with Ximena Feijoo in art direction, and the public's complicity in an unexpected ending that will help build a better future.