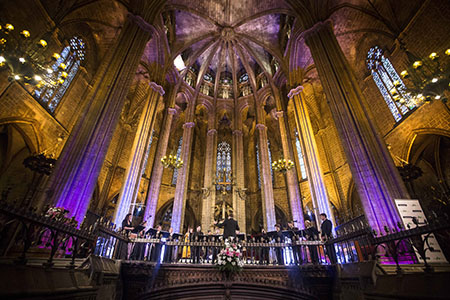 The Mayor of Leon, Jose Antonio Ten, accompanied by the Councilor for Action and Cultural Promotion, Evelyn Fernandez, and the director of the National Center for Musical Diffusion (CNDM), Francisco Lorenzo, today presented the XIX Cycle of Historical Music of León, that he National Dissemination Center Musical (CNDM) co-produces with the City Council. The programing, which runs until 28 of May throughout eight fundamental quotes in this same space under the title Routes of the European Baroque, has an unrivaled roster of artists and specialized sets in music of that period, as they are La Grande Chapelle, The Royal Chamber, The King’s Consort, Ensemble 1700, Artifact, Musicians of His Highness Y Alchemy Music as CNDM resident group.

At the gates of its twentieth edition, the cycle of Historical Music of León wanted to highlight the essential figure of Antonio Rodríguez de Hita coinciding with the tercentenary of the former chapel master and organist, as well as the author of some of the best pages of sacred music and zarzuela of our heritage. The Madrid composer, one of the most audacious and prolific of the 18th century, will be present transversally and through all its facets (from the religious to the most festive and theatrical) at the inaugural concert of La Grande Chapelle (19 from January), in the proposal of the Royal Chamber (4 February) and also on the music stands of the original program of Los Músicos de Su Alteza (11 of May).

In addition to the series of concerts scheduled at the León Auditorium, the cycle includes various educational activities, as the XI University Extension Course, organized jointly by the CNDM and the University of León, always seeking dialogue between the public and specialists (Albert Recasens, Emilio Moreno, Alvaro Garrido, Luis Antonio Gonzalez...), and the IX International Baroque Vocal Interpretation Course (23 February) what, from the hand of his director and mentor, Eduardo López Banzo, has become in recent years a showcase for new promises of singing.

Tickets to all the concerts in this cycle are priced at 12 euro and of 7 euros for children 26 years and can be purchased online at auditorio.aytoleon.es from today. The sale at the box office will take place every day of the concert two hours before the start of the concert.

from its origin, the cycle of Historical Music of León and has decidedly committed to the recovery and dissemination of Spanish musical heritage with the invaluable collaboration of the best performers and formations of each specialty under the umbrella of programming integrative, dynamic and plural CNDM. In this way, in addition to the commemorative celebrations around Rodríguez de Hita, Artifact (27 of April) will recall through various scores the eight centuries that have elapsed since the birth in Toledo of the Alfonso X the Wise, king of castile and leon.

"It is very important that our programming continues to work every year with the best artists to keep alive the flame of the musical memory of our great composers and rescue the forgotten works of our heritage", Explain Francisco Lorenzo, director of CNDM. "However, the Cycle of Historical Music of León should also serve as a thermometer of the present and a stimulus to the sensitivity of the most current public».

He Leonese alderman has highlighted the importance and consolidation in the cultural offer of the city of these cycles of Historical Music, that “allow Leonese fans of classical music to access a unique program, exclusive and of great quality”, for which he thanked the initiative of the National Center for Musical Diffusion and the collaboration of the University of León.

ALL THE PATHS OF THE BAROQUE

At the opening concert of 19 from January, Albert Recasens and La Grande Chapelle will focus on the figure of Antonio Rodríguez de Hita (to whom they already dedicated an enlightening album a decade ago) with a proposal (pieces for eight voices, presented for the first time in modern times) that delves into the perseverance of polychoral music in the Hispanic sphere. With a program centering on the same composer, The Royal Chamber by Emilio Moreno they will invoke (4 February) Some of his contributions to the zarzuela genre (as it passes through the pages of The harvesters of Vallecas Y The farmers of Murcia, among other titles) in the company of the soprano Aurora Peña and the tenor Francisco Fernández-Rueda.

To give impetus to the new quarry of singers (the soprano Belén Vaquero, the countertenor Mikel Uskola and the tenor Josu Cabrero), Eduardo López Banzo (in the address and the key) will face again IX International Baroque Vocal Interpretation Course (23 February) to those who were great rivals in life for first place in opera: Händel and Giovanni Bononcini. Back to one of his specialties, early 18th century french baroque, director Robert King y ensemble The King’s Consort it will center (16 of March) in the legacy of three viola da gamba virtuosos (François Couperin, Jean de Sainte-Colombe and Marin Marais) de la mano de la soprano Madison Nonoa y la mezzo Marianne Beate Kielland.

Meanwhile, and again at the Ciudad de León Auditorium, he Ensemble 1700 will reel off (5 of April), with Dorothee Oberlinger (flute direction and) y Dmitry Sinkovsky (countertenor and violin) to the head, The pieces (Händel, Telemann, Vivaldi, Corelli, Bach…) an atypical repertoire of baroque music (with the folia as a common thread) gathered under the suggestive title furious cheers! He 27 of April, Artifact and actor Nacho Bravo will commemorate the eight centuries that have passed since King Alfonso X el Sabio was born in Toledo, whose influence on music through the Cantigas will remain in the assortment of pieces gathered in the original and unprecedented catalog I am the King and in which art is the supreme reason for praise.

The program of Musicians of His Highness, that will lead (11 of May) Luis Antonio González, with Eugenia Boix and Olalla Alemán among the cast of soloists, brings together two of the most important Spanish musicians of the 18th century: Jose de Nebra and Rodriguez de Hita. Fruit of that encounter, a seductive bouquet of tunes will emerge, skits and other festive compositions. By last, at the concert of Alchemy Music (28 of May), the group of the violinist Lina Tur Bonet, both residents of the current CNDM season, will contrast, with his usual rigor and mastery, Bach's orchestral music with that of one of his models, Vivaldi.