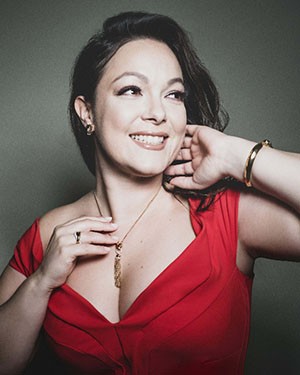 The Italian soprano Eleonora Buratto, considered one of the best interpreters of the Puccinian character, returns to the Madrid Coliseum to perform six performances of Bohemian in a season in which he will also sing it in New York.

Eleonora Buratto's career does not stop conquering stages and gaining followers all over the world. Not for less: His schedule points out commitments in the most important theaters of the international lyrical scene thanks to a voice of impressive beauty and a temperament that leaves critics and audiences breathless wherever he performs..

The singer arrives in Madrid with her acclaimed Mimì de Bohemian after having triumphed with the popular character of Puccini at the Metropolitan Opera in New York, reaping impressive public and critical success, scenario in which she will play the Parisian seamstress again this year. In the Royal Theater he has already sung, since his debut in 2012 with The two Figaro, titles like Don Pasquale, L'elisir d'amore, The Marriage of Figaro, Carmen e Idomeneo. Now come back with Bohemian, who will interpret the days 13, 16, 19, 27 Y 30 December and 3 from January, in a montage staged by Richard Jones and with Nicola Luisotti on the podium in front of the Madrid Symphony Orchestra. It is a co-production of the Teatro Real, the Royal Opera of London and the Lyric Opera of Chicago. “I am excited to face new artistic adventures, but, this time, to the joy I add the emotion of singing for a theater with him 100% of its capacity ", affirms the singer born in Mantua. "I am in Madrid in full rehearsals of Bohemian embodying Mimì, one of my distinctive roles. It is also the last character I sang at the beginning of 2020, before confinement, at the Royal Opera in London. And none of us could imagine at that moment that the entire world and the world of opera were on the verge of paralyzing because of the pandemic.. I hope that the circle is finally closed and that, although with all the necessary precautions, we are resuming life as before”.

Already in the summer of 2020 Eleonora Buratto was able to restart artistic activity with the Requiem Donizetti and Verdi. “I also debuted two exciting Verdi roles as Elvira and Desdemona, in addition to the Mozartian Fiordiligi in Così fan tutte, first at La Scala and then in Turin –with Riccardo Muti–, and Anaïs in Moses and Pharaoh at the Rossini Opera Festival, but rehearsing now with a true spirit of normality like the one we are experiencing at the Teatro Real is a wonderful gift. I have been linked to this theater since 2012; here I have made important debuts like Elettra's in Idomeneo, among others. Now it's Mimì's turn. I hope to convey to the Spanish public the emotions of a role and a work that for more than a century has spoken to audiences around the world of love, joy, the illness, the pain and, especially, the infinite melancholy that brings the end of youth. I think today, more than ever, Bohemian is capable of giving us the truest and most shared emotions”, concludes the soprano.

After his commitment to Madrid, he will travel to Rome to participate in three Rossini concerts with the Orchestra e Coro dell’Accademia Nazionale di Santa Cecilia conducted by Antonio Pappano, to Paris to sing the Requiem by Verdi directed by Daniele Gatti at the Théâtre des Champs-Élysées and will return to New York, this time to debut Madama Butterfly and again embody Mimì from Bohemian, both engagements at the Metropolitan Opera House during March, April and May 2022