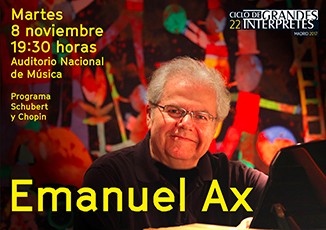 The pianist Emanuel Ax, winner of seven Grammy Awards, will offer a concert next Tuesday 8 November within 21ª season Cycle Great Performers Foundation Scherzo, in which he will perform works of Chopin Y Schubert.

Ax (Leopolis, Ukraine, 1949) He is recognized for his special dedication to contemporary compositions. He has premiered works by John Adams, Christopher Rouse, Krzysztof Penderecki, Bright Sheng O Melinda Wagner. Polish-American, It was his father who introduced him to study piano when he was six years. As a child, he moved with his family to Winnipeg (Canada) Y, later, To united states, where Ax delves into his musical learning. The Epstein Scholarship Program of the Boys Clubs of America funded his studies at the exclusive Juilliard School in New York, where he currently teaches. In its first stage, He was awarded the Young Concert Artists Award, first prize at the Arthur Rubinstein International Piano Competition in Tel Aviv, in 1974; and the Avery Fisher Prize, in 1979.

In recent years, Ax has turned to the composers of the twentieth century, although its interpretation of classical composers like Beethoven O Mozart It has been widely recognized. Ax is, Likewise, a fervent admirer of chamber music and works regularly with artists such as Young Uck Kim, Cho-Liang Lin, Yo-Yo Ma, Edgar Meyer, Peter Serkin, Jaime Laredo e Itzakh Perlman, who has won the Exceptional SCHERZO for his latest recording. Precisely, His chamber work with cellist Yo-Yo Ma have been recognized several times at the Grammy Awards; as well as his piano sonatas Haydn. Since 1987 is exclusive Sony Classical artist and the label has recorded concerts Liszt, Schoenberg, Brahms Y Astor Piazzolla, among others.

Emanuel Ax lives in New York with his wife, the pianist Yoko Nozaki. He is a member of the American Academy of Arts and Sciences and Doctor Honoris Causa by the Universities of Yale and Columbia. He is a regular performer at festivals BBC Proms, Edinburgh, Hollywood Bowl, Mostly Mozart, Ravinia o Tanglewood. After his performance in the Great Performers of Scherzo Cycle, the pianist will offer two concerts in Spain: he 9 November in Alicante (Home theater) and the 10 November in Zaragoza (Auditorio Palacio de Congresos).

The Ax will be the seventh performance (after the cancellation of the concert Till Fellner, that already has a new date for him 21 of November) 21st season of the Great Performers Series of the Scherzo Foundation, inaugurated last February by Ivo Pogorelich. In addition to the Croatian interpreter, They have also gone through the stage of the National Auditorium reputed pianists Arkadi Volodos, Paul Lewis Y Lang Lang, the latter in a special concert for which tickets sold out.

The program includes the 21st season 11 concerts, and two master classes. Throughout their 21 editions, Great Performers Cycle has received more than 200 concerts of the best pianists of recent decades, whose music have enjoyed over 300.000 people.