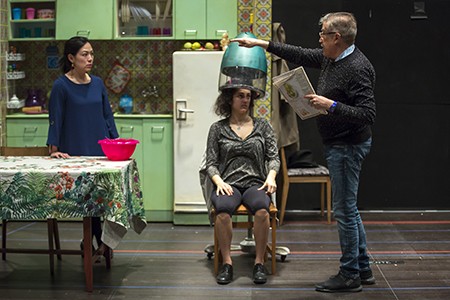 The Teatre Martin i Soler premiere 8 March this hilarious comic opera deceptions about a passionate innocent bourgeois astronomy. The work is represented by the assembly Arriaga Theater in Bilbao in co-production with Opera Monte Carlo, who won 2013 Campoamor Award for best new production.

It is about, Besides, the second time that Sagi working with young singers Placido Center Sunday. In the year 2012, the 'regista' ovetense presented in Valencia the first zarzuela of this project: The duo The African ', Fernandez Caballero, which it became the first show to exhaust the capacity of the Teatre Martin i Soler.

The musical director is Jonathan Brandani, Italian-American teacher who develops an emerging career in Europe and the United States, while highlighting for their forays into old music with his training in L'Eloquenza.

The cast is completed by the tenors and basses section of Cor de la Generalitat Valenciana.

Based on a play by Carlo Goldoni, Italian playwright who both wrote about the social changes of the late eighteenth century, the libretto tells a funny plot to make the wealthy protagonist (Good faith) consent marriages of their daughters (Clarice and Flaminia).

To the claims of the parent, who wants to marry young women with wealthy aristocrats, interested suitors (Ecclitico and Ernesto) They take advantage of their interest in the stars to plot deceit and make him believe that travel to the Moon.

As he explained by Emilio Sagi himself in the presentation assembly, the work "is a character scorning the old and very macho, which has a completely outdated idea of ​​woman, obviously, sale scalded ".

For this production, the stage manager of Oviedo retouch the original argument and moved the mess the twentieth century, in an atmosphere of cabaret and fantasy, framed in the scenery designed by Daniel Bianco.

Tickets for 'Il mondo della luna' have a unique price 35 euros. In addition the opening day 8 of March, the Teatre Martin i Soler will host more functions day 10 Y 14 of March. The capacity of the representation of the day 12 It is reserved for the public of Degree Program, within the Social Action Plan Les Arts.