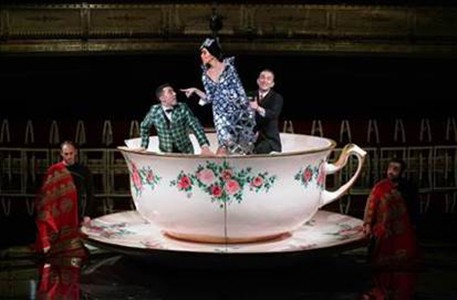 With particular interest the audience expected for months set assembly 'Free Education', made of Gerónimo Giménez and premiered at the Teatro Eslava in Madrid 1901, Y 'The white cat', created by Giménez and Amadeo Vives, and presented at the Comedy Theater in the capital 1905. He Teatro de la Zarzuela will house both jewelry small forms during 17 functions, of the 6 al 28 of May, in a show conceived as a unique and indivisible proposal. Son Many inducements, and among them stands, undoubtedly, he Tipping scenic and aesthetic this Free version of Enrique Viana, who also signs the stage direction, from the to own theater space.

The six hundred patio chairs have been removed and instead It is installed scenario: a large circumference with mirror floor, what, among many other amazing effects, even it manages to turn the majestic lamp in a protagonist of the work. And where you have then gone public? As well as the boxes of the different floors, respectable occupies no less than the real scenario Theater. For that, in that sacred place where they have acted García Lorca or María Callas, some steps have been installed that will house more than 200 people.

Teacher Manuel Coves will be in charge of the musical direction this, in the words of Viana own, "Comic nonsense lirico in an act". He will lead the Holder Choir Teatro de la Zarzuela and of the Community of Madrid Orchestra (Titular del Teatro), to occupy a pit unconventional located in the area of ​​the room where precisely is the main gateway to public.

He cast is coral and it is composed of great talents of the song, the performance and both at once such as mezzo Cristina Faus, singer Roko, the actress cross Beitia, mezzosoprano María José Suárez, tenor and actor Ángel Ruiz, baritone Axier Sánchez, the actor José Luis Martínez and actors and singers Iñaki Maruri Y fake Santamarina. A body 20 dancers Full cast.

For this "crazy" stage, production also has Daniel Bianco scenery -in which is his first artwork to the coliseum signing since he took charge of his direction, Pepe Corzo wardrobe, Albert Faura lighting Y choreography by Nuria Castejón.

Enrique Viana explains why his version, in which, naturally, They remain in full each and every one of the musical numbers, but whose history ("just one, and not a double program ") It is radically different: "Both (the original) They are peppered with jokes incomprehensible to the public today and some may offend particularly feminine ".

For this reason, the author considered "Both the plot and the text had to change root", and for this he spent 'free education' serving 'White Kitten' and rewrote the first completely leaving the second plot and characters with some scenes from the original judged "sympathetic and harmless". "As a result of these considerations It was this long piece that respects each note Gimenez and each letter of his singable”, explains Viana. Singable written by scriptwriters Guillermo Perrín, Miguel de Palacios, Joseph Jackson Veyán and Jacinto Capella.

Everything is ready for this "nonsense lyrical comic one-act" rebaptized: " 'Free teaching and white cat', or 'Come Nah to spend the afternoon ' ", with which the Teatro de la Zarzuela reinvents.