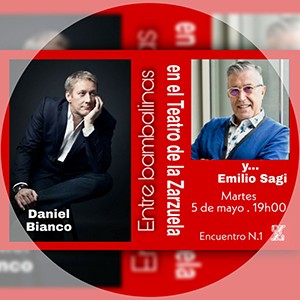 Given the prolonged situation of confinement, he Teatro de la Zarzuela has promoted its offer and activity on its social networks to maintain continuous contact with fans and artists, and to contribute to the dissemination of culture in these times when it becomes even more necessary. Under the name ‘Behind the scenes at the Teatro de la Zarzuela’, from tomorrow Tuesday, 5 of May (19h00), the Jovellanos square coliseum will start a series of meetings between its director, Daniel Bianco, and different music and theater professionals. The first guest behind the scenes of the historic Theater: stage director Emilio Sagi.

In this first week the choreographer Nuria Castejón will also talk to Bianco (Wednesday 6), the baritone Luis Cansino (Thursday 7) -recent creator of the ALE Union of Lyrical Artists for the defense of the sector- and the conductor Guillermo García Calvo (Friday 8), musical director of the theater from the past 1 from January.

Among the attractions of the network proposal of the Teatro de la Zarzuela is the possibility of enjoying it on its YouTube and Facebook channels, in open and in high definition, of the productions released in the theater since June 2018. Added to this are the dozens of Theater titles included in the Theater Library of the Documentation Center for Performing Arts and Music (CDAEM).

Both institutions belong to the National Institute of Performing Arts and Music, INAEM, of the Ministry of Culture, that under the hashtag #LaCulturaEnTuCasa these days promotes the dissemination of numerous and very diverse proposals for their enjoyment in homes.