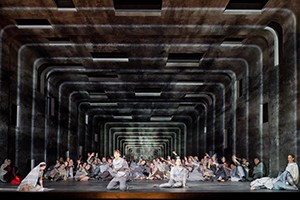 Co-production of ABAO-OLBE and the Theater Bonn of the Jerusalem from Verdi, with staging of the Mexican Francisco Negrín, It premiered last weekend in the city cradle of Beethoven with resounding success from the public and critics.

This is the first collaboration between the Bilbao Association of Friends of the Opera and the famous German theater and for those responsible for ABAO “this co-production represents another milestone in the musical history of the institution and reinforces the international prestige of the Bilbao association, whose collaboration arouses the artistic interest of theaters and lyrical festivals of reference ".

With an excellent work of musical direction, cast and scene, last Sunday's premiere concluded with a standing ovation from 19 minutes, with the theater audience on their feet. Negrín himself shared the emotion of the moment on social networks, "Who would have imagined? We release Jerusalem, an early and unknown piece by Verdi - it was actually the German premiere- and it turns out it's a great success! The audience gave us a standing ovation of ¡¡¡more than 19 minutes!!!”

Francisco Negrín's scenic proposal has achieved, with the impressive scenery of Paco Azorín and the careful wardrobe of Domenico Franchi, a modern and suggestive scene, that intelligently attracts attention without falling into excess and without distorting the plot. It is a tremendously innovative and original proposal that encourages the lyrical show itself.

Critics have praised the staging that places the action at the time of the Crusades as a work that combines technology, history and current elements to recreate a tremendously symbolic Verdian universe, with a virtuous and expressive execution resulting in an impressive theatrical effect. The German newspaper General Anzeiger emphasizes that Francisco Negrín has brought "a magical musical moment, that the public knew how to celebrate the opening night with vigor "; "An incredibly suggestive space, with a mobile architecture that extends to infinity and impressive light effects ", "An absolutely round night". Meanwhile, WDR3 has rated it as “an impressive show of great scenic power”.

Jerusalem, Verdi's twelfth opera will be seen in Bilbao in future seasons within the project everything Green which will stage all the operas of Busetto's master. The national and international cultural sector has given impetus to the Verdi adventure of ABAO, that started in 2006 and will culminate in 2021.