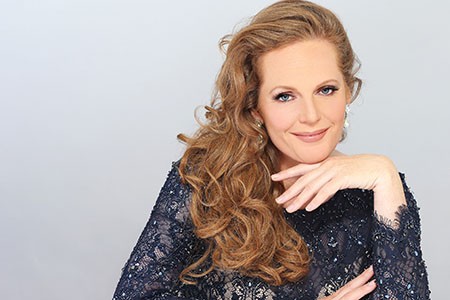 He National Dissemination Center Musical (CNDM), in co-production with Teatro de la Zarzuela, will present on Monday 20 December at 8:00 p.m. to the Dutch soprano Eva-Maria Westbroek in its first recital inside of the Lied, which this season celebrates its XXVIII edition. british pianist Julius Drake will accompany her on such an important occasion with a kaleidoscopic program that begins with the ‘Seven songs of youth’ of a still romantic Alban Berg Y, in a prodigious leap involving Richard Wagner, Jesus Guridi Y Carlos Guastavino, will conclude to the rhythm of tango with 'The lost birds' by Astor Piazzolla.

Westbroek is without a doubt one of the most acclaimed and recognized opera singers on the current scene. Although he has specialized in the Wagnerian repertoire, masters a wide interpretive range, as evidenced by the works chosen for their debut in the Lied cycle, who once again bets on top-level international artists, specialists in the genre and the leading voices of each specialty. It is no secret that after her memorable debut at the Royal Theater as the protagonist of Shostakovich's 'Lady Macbeth of Mtsensk', ten years ago now, the singer won the admiration and affection of the Madrid public.

The tickets for this recital, with a General price 8 a 35 euros, are available at the box office of the Teatro de la Zarzuela, National Music Auditorium, INAEM theaters, www.entradasinaem.es and on the phone 91 193 93 21.

Unexpected ending to the rhythm of tango

Westbroek defends a soprano voice very different from the usual ones: chunky, penumbrosa, with body and density, la de una pushed, that announces, Likewise, a very varied program that will be accompanied from the keyboard by his faithful squire, London pianist Julius Drake, who will not miss the opportunity to show off as one of the most accredited companions for this type of adventure. They will uncork the program with the Seven songs of youth of a Berg yet to be defined. The score distills influences of very different signs and scope: from Schumann a Schönberg, going Mahler Y Schreker. there is nothing.

Without leaving the romantic world, the musical feast continues with one of his few works for Wagner's chamber song, who composed his “Wesendonck-Lieder”, based on five poems by her lover, while finishing the no less fiery first act of 'The Valkyrie'. Meanwhile, Guridi's six Castilian songs were conceived under the spell of French Impressionism and the protective presence of Falla. The rich Creole folklore of Guastavino's songs takes us to the other side of the Atlantic, before the unexpected ending to the rhythm of tango: the unsuspected pages 'The lost birds' by Piazzolla.

Since its debut in 1994, Eva-Maria Westbroek (Belfast, 1970) has performed in the great lyrical temples (from the New York Met to the Milanese Scala) and premiered important roles in front of the always demanding public of the festivals of Aix en Provence Y Bayreuth, on which stage he debuted in 2008 with a portentous Sieglinde led from the pit by Christian Thielemann, who invited her to the Green Hill later to show off again with the “love death” of ‘Tristan and Isolde’. It has also shown a enormous solvency as a Verdian soprano with tonnage roles like Elisabetta (Don Carlo) Tosca the Desdemona (Otello).

The songs of Jesus Guridi (and also, by transatlantic extension, those of Carlos Guastavino and Astor Piazzolla) they are a nod to Spain. «In the recital that Eva-Maria Westbroek and Julius Drake have prepared we will be able to verify to what extent Guridi's traditionalism is of fine craftsmanship, because popular quotes are handled like distilled echoes, light and successful characters and a sustained melodic happiness», explained in the notes to the program the specialist and writer Blas Matamoro. "The piano plays on its own in a rich countersong speech. It is like the voice saying something that is beyond words..