Fidelio arrives at the Royal Theatre 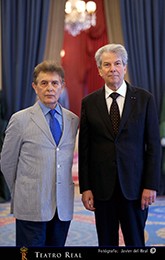 Next Wednesday, 27 of May, the only opera title composed by Ludwig van Beethoven will return to the stage of the Royal Theater, Fidelio, of which eight performances will be offered from its premiere until the 17 of June.

This song to freedom has two important names in the direction to raise the curtain. Teacher Hartmut Haenchen, specialist in the German repertoire and to whom we have heard unforgettable performances at the Real (Lady Macbeth de Mtsensk, Boris Godunov Y Lohengrin), will be placed again at the head of the Titulares Choir and Orchestra of the Royal Theater and a cast headed by Michael King (Florestan), Adrianne Pieczonka (Leonora), Franz-Josef Selig (Rocco) Y Anett Fritsch (Marzelline) in the lead roles.

Pier’Alli, stage director and also responsible for the scenography, the costumes and lighting, is presented for the first time at the Teatro Real with a complex and symbolic stage conception, stripped of ornamental scenic elements and in which audiovisual support is decisive to reinforce different aspects of a plot that encloses itself, various frames.

Fidelio It is inspired by a real event that occurred in France during the Terror period, although Jean-Nicolas Bouilly's libretto moves the action to Spain to preserve anonymity. The work contains much more than a determined defense of justice and freedom, it is an exaltation of love and fidelity, and has the attraction that in her the woman, Leonore/Fidelio, becomes the conducting and executing instrument, a character who fights for his principles with all his intellectual ingenuity, leaving the victim's place, waiting for the hero or the revenge that, traditionally, women were assigned in operas.

The complexity of Leonore is transferred to a score with harsh vocal demands that require a soprano with lyrical and dramatic resources for the leading role, able to draw an expressive singing line, which are undoubtedly precursor characteristics of Wagner's heroines, to which it has given life, On numerous occasions, Adrianne Pieczonka.

Fidelio and its emotional ideological charge, his song of struggle and his exaltation of love and freedom, It is a symbol capable of stirring the consciousness of today's society., above history.

Two parallel activities have been organized around the premiere of the opera. The National Museum of Romanticism will host the conference of Joaquín Turina, Beethoven in romantic Madrid, to be held 28 May at 19.00 hours in the museum auditorium. And in the cycle Chamber Sundays, soloists of the Titular Orchestra of the Royal Theater will perform a program entirely dedicated to the German composer, he 7 June at 12.00 hours in the main hall of the Theater.