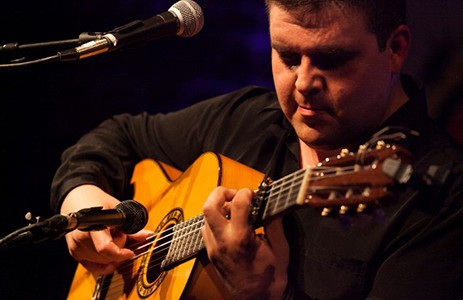 Next Saturday, 14 from December, in the ballroom of the Teatro Real, the singer and guitarist Ricardo Fernández del Moral will pay tribute to the history and artists of flamenco through the different disciplines of this universal art, with a show that will tour from the most classic and traditional side to the adaptations of existing songs and popular music.

In its passage through the International Festival of Cante de Las Minas de La Union 2012, Ricardo Fernandez de Moral manages to win the first five awards: malagueña, Taranta, Soleá, Toná y Minera, including "Mining Lamp". His art is pure music, an innate gift to which are added conditions, compass, timbral beauty, sense of the musical phrase and knowledge of styles.

Flemish version will feature the special participation of the dancer Monica Iglesias, Award "Desplante" at the International Competition of Cante de las Minas 2018, whose brilliant career starts in professional companies Joaquín Cortés, Aida Gómez, and Rafael Estévez & Nani Cloths. Collaborates with Carlos Saura in the "Flamenco Hoy", He has been part of the Ballet Andalusia under the direction of Ruben Olmo and, later, becomes first dancer Antonio Gades Foundation, in which he plays the lead role in the play "Carmen". Shortly after he joined the National Ballet of Spain under the direction of Antonio Najarro.

Rounding out the cast clappers Jose Jurado and Miguel Vallés, both with extensive experience and whose presence is demanded by great artists from the world of flamenco.

At 19:00 hours doors Street Felipe V will open and the 19:30 hours attendees will be welcomed with a tasting of a Spanish wine cellar Juan Gil, Real Flamenco collaborator since its launch. The performance will take place at 20.00 hours and at the end of it, viewers who wish may enjoy the company of artists and approach as well, personalized way, the world of flamenco.