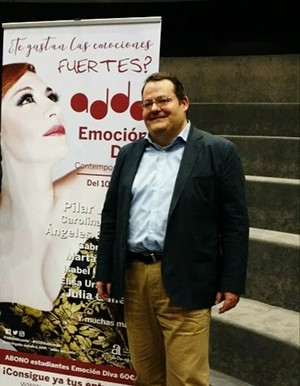 Fraile designation of Manterola has been made after a selection process that has served the principles of equality, merit and ability, and after submitting to evaluation of the Artistic Council of Music all the projects presented, in accordance with the provisions of the Royal Decree 497/2010, from 30 of April, regulating the participation and advisory bodies of the INAEM, and the articles 7 Y 8 of the CNDM Statute.

This advisory body of the INAEM selected a small number of candidates, that of Francisco Lorenzo Fraile de Manterola receiving the unanimous support of all its members.

The new director of the CNDM, who will take office the next 1 October, He has held the position of deputy director and artistic coordinator of this INAEM creation center since 2012.

Extensive professional experience
Lorenzo Fraile Francisco Manterola has extensive experience in artistic management. Since 2012 has served as deputy director of the CNDM, where he has performed the artistic coordination of successful concert cycles such as those of Universo Barroco, Counterpoint Summer, the Lied Cycle –which takes place together with the Teatro de la Zarzuela–, or the popular Bach Vermouth, Bach in the Cathedral and the musical marathon Solo Música!, an extensive program of concerts for all audiences with which the CNDM celebrates Music Day every two years.

further, Fraile de Manterola has coordinated important concert circuits organized and co-produced by the CNDM throughout the national territory and outside our borders. Between these, the concert series Beethoven Actual and Beethoven by Liszt stand out, the Contemporary Conferences of Santiago de Compostela, the Week of Religious Music and the Zarzuela Days of Cuenca, the Cabanilles and Serenates de Estío Congresses in Valencia and the concerts organized by the INAEM artistic center at the International Festival of Sacred Music in Bogotá (Colombia).

Previously, worked in the direction, programming and management of the Castilla y León Symphony Orchestra, and the Miguel Delibes Cultural Center, where he served as general coordinator of the Music Division of the Siglo Foundation for the Arts in Castilla y León de 2008 a 2012. From this period, the coordination of the Great Orchestras cycles stands out., Autumn festivals and Music Key to the Passion and Easter, or organ festival Castillla churches and Leon Organic Art.

Between 1998 Y 2008 He served as technical secretary of direction in the Palau de la Música, Congresses and Orquesta de Valencia, where management work performed, programming, production and coordination of the orchestra and festivals such as Flamenco de Valencia, Valencia Jazz and Pop to Palau.