The Royal Theater celebrates the fourth edition of its Annual Gala 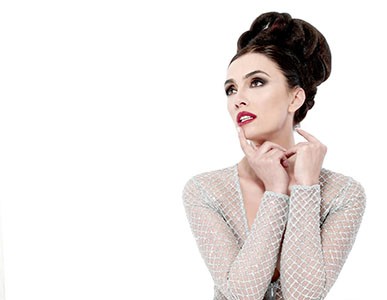 Next Thursday, 18 of November, will take place the fourth edition of the Grand Annual Royal Theater Gala what, this time, will be starring two women with different artistic languages, but with the same charisma and sensitivity: soprano Jaho Ermonela and the singer Rocío Márquez.

Their voices, his personality and his deserved prestige will merge in a night in which opera and flamenco will bring emotion to all corners of the Theater in an event that has been called Fusion.

Jaho Ermonela, one of the most acclaimed lyrical singers in the world, has left in the memory of the Teatro Real some of the most moving performances in its recent history. His ability to identify with each character he gives voice to, passionate, empathetic and close, they have managed to make us see in it the protagonists of Puccini's operas, Gave it Gounod, composers who will be present in the program offered at the Gala. Accompanied on piano by Pantasilena Jaho, Ermonela will also give voice, in a clear wink at his stage partner, to Nana de Sevilla Federico García Lorca.

It is not the first time that the cantaora Rocío Márquez links flamenco art with other musical disciplines. His clear voice, full of nuances and with a coloratura that makes it very special in flamenco singing, They have made her a benchmark for her generation.. Seguiriyas, guajira, romance or cuplé por bulerías will make their way from the depths of her being in a performance in which she will be accompanied by the guitarist Manuel Herrera and clapping and chorus of the Mellis.

Donations from the Gala will be destined, on the one hand, to the Social Program of the Teatro Real and, for another, will cover the economic needs of the Theater itself caused by the pandemic.

Firmly committed to minors in disadvantaged situations and groups with disabilities, the Teatro Real has launched different initiatives in its Social Program aimed at promoting its approach to music and culture, like the project Inclusive Musical Group. Composed of young musicians between the 10 and the 24 years, with different cognitive levels, the Group bases its activity on the autonomy and creativity of these special artists, promoting all their talent and developing their abilities.

Despite international recognition for the quality of its programming and the determined support of the public and sponsors, the Theater has had to face the harsh closure during the pandemic, the significant investment in health security and Covid protocols and the long period with capacity reduced by almost one 40%, which has caused a significant economic loss. In order to continue being the generator of the artistic and economic activity that has made it a benchmark, a part of these donations will be destined to its necessary recovery.

You are Romance: Brindisi

Siberia: “No! If a pensier…In his revived love "

Adriana Lecouvreur: "There: I hardly breathe…I am the humble handmaid ",

the Mellis, clapping and choir

For this Annual Gala 2021, Rocio presents a flamenco style recital (palos) traditional with which he lands and looks head-on at the tradition from which his music is born.

It's so familiar to sing with guitar (Manuel Herrera) and palms and choirs (the Mellis), that the repertoire itself sprouts in an improvised way according to its intuitive sensitivity. Seguiriyas, guajira, romance or cuplé por bulerías.

He was born in Albania and began his singing studies at the age of six.. To the 19 was awarded a scholarship to study with Katia Ricciarelli in Mantua, before completing his studies at the Accademia Nazionale di Santa Cecilia in Rome. Her first international milestones include the roles of Mimì de Bohemian, Teatro Comunale in Bologna; Susanna de The Marriage of Figaro at the Teatro La Fenice in Venice and Micaëla de Carmen at the Verdi Theater in Trieste. Recognized interpreter of Violetta de La traviata and the title roles of Madama Butterfly – who has sung at the Metropolitan Opera House in New York and the Théâtre des Champs-Elysées in Paris- Y Suor Angelica, staged alongside Kirill Petrenko at the Bayerische Staatsoper in Munich. Recently she has sung Desdemona from Otello in the Royal Opera House in London, Liu de Turandot at the Gran Teatre del Liceu in Barcelona and the title role of Adriana Lecouvreur in the Vienna Staatsoper. At the Teatro Real he has participated in La traviata (2015), Otello (2016), Madama Butterfly (2017) Y Thaïs (2018).

Born in Albania, Pantesilena Jaho began her musical studies in Tirana and continued them at the prestigious Cherubini Conservatory in Florence., Italy, before arriving at the Royal Conservatory of Music of Madrid. has taken part, and has been awarded, in different contests, concerts, masterclasses and productions in Greece, Italy, Germany and Spain. His solo repertoire ranges from classical to impressionism and contemporary, and includes, Likewise, chamber music repertoire.

Exalted by the press as "the voice of the new generation of cante jondo", Rocío Márquez (Huelva,

1985) He has been building an artistic career for more than a decade that today overflows the flamenco scene, where it is already a clear reference. His restless personality is evident in his discography, that in a transversal way shows us both his great love for the flamenco tradition and his urgent need to expand the limits of that same tradition, exploring and experimenting with melodies, instrumentation, arrangements and lyrics.

A) Yes, since that DVD recorded live from Here and now (2009) until Love conquers all (2020), the digital EP around Amor brujo that he records together with Enrike Solinís and the Euskal Barrokensemble, we find a bouquet of albums with which he has been strengthening his artistic discourse and reaping the recognition of the fans. Clarity (2012), The boy (2014), Firmament (2017), Dialogues of old and new sones (2018) –together with Fahmi Alqhai– and Seen on Thursday (2019) are his discographic works published to date. For the latter, gets the prize Jazz Victories for the best music album in the world, being the first Spanish artist to achieve it.

This flamenco guitarist (Sevilla, 1976) started playing the 9 years of his father's hand. From the beginning he showed his interest in learning about the different styles of cante, turning him into a refined and classic accompaniment guitarist. He has participated in numerous guitar festivals as important as the one in Córdoba and in different editions of the Seville Flamenco Biennial., as well as in television and film programs.

In his career he has accompanied artists of the stature of Jesús Heredia, Miguel Ortega, Dew Safe, Jose Menese or El Cabrero, among many others. Since 2010 teaches Flamenco Guitar classes in different institutions in Jerez de la Frontera and Huelva, and currently teaches at the Seville Conservatory of Music.

Brothers Antonio Lucas and Manuel Jesus Montes Saavedra (Huelva, 1982) they were born into a humble gypsy family, where music and community celebrations are part of everyday life. They began their professional career with Los Activos and the Sevillanas group Manguara. Since then they have accompanied such renowned artists as Arcángel, Rocío Márquez, Miguel Poveda, Rosalía, Ketama, Vincent Friend, El Cigala, The Pele, Duquende or Estrella Morente, among others.