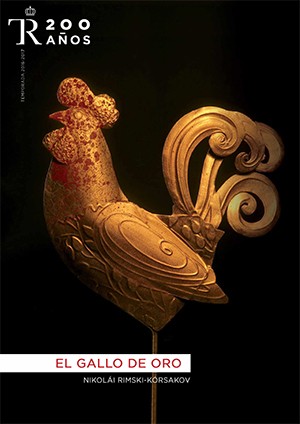 Between days 25 May and 9 of June he Teatro Real will offer 9 functions from The Golden Cockerel, from Nikolai Rimsky-Korsakov (1844-1908), new production of Teatro Real in co-production with Lorraine National Opera and the Theater La Monnaie in Brussels, where the opera premiered last December with great success.

The play, based on the eponymous fable aleksandr Pushkin (1799-1837) It ─ which in turn he was inspired by one of the Tales of the Alhambra fromWashington Irving (1783-1859)─ is a bitter satire on the arbitrariness of tyrants, abuses of power and conformism of the subject, but also a sarcastic criticism of the Russian musical nationalism of the late nineteenth, the same composer, Rimsky-Korsakov, He had contributed to exalt with bright and colorful works inspired by Slavic folklore, as his famous Scheherazade, or opera Tsar Saltan the with its popular Flight of the Bumblebee.

When he wrote The Golden Cockerel, last of his fifteen operas, the composer was deeply suicidal war by Russia against Japan launched affected 1904 with thousands of dead, by repression and corruption of the tsarist, and the abortive revolution 1905 the slaughter of Bloody Sunday. further, explicit support for student demonstrations temporarily deprived him of his professorship at the St. Petersburg Conservatory, and critical departure from the principles of musical nationalism caused resentment and tension with his fellow composers.

this confusion, bitterness and anger filled with sarcasm pages The Golden Cockerel, in which no one escapes the fierce cartoon: a whimsical czar, lazy and self-centered, submitting the designs of his kingdom to the crowing of a rooster gold; two children of Tsar indolent and stupid, whose greed leads to double fratricide; a cunning and manipulative astrologer who pulls the strings of power with the complicity of a perverse and lascivious Tsarina ... Even the subjects, sycophants and conformist, composer deserve compassion.

To give voice and soul to this travesty of the kingdom of Romanov, Rimsky-Korsakov was stripped of all vanity, using vocal and instrumental writing in the service of playwriting, alternating simple and stunning melodies, rudas harmonies and elaborate, great encouragement phrases and themes almost epigrammatic, Popular songs and Wagnerian motifs blow, but always with the efficiency that characterizes his brilliant use of orchestral colors.

Pelly, who also signs the design of figurines, avoids moralizing and picturesque reading of the opera, leaving intact the mysterious and irrational halo that underlies the story, without giving up his mockery of perjury, lies and grotesque behavior of despots, egomaniac whose blindness makes them vulnerable to manipulation.

Ivor Bolton He will direct his ninth opera at the Royal Theater, after recent successes in their slings and exciting readings Billy Budd YRodelinda. With The Golden Cockerel Bolton will light the hidden undercurrent in this macabre tale and enigmatic, wherein Rimsky-Korsakov, guarded by the tsarist censors, he used all the expressive music to say what words could not count.

The Golden Cockerel, the story of a rooster crowing when the enemy arrives
Con la cellist Iris Azquinezer

Live broadcast of The Golden Cockerel

The opera will be broadcast live, in Classical Radio, the RNE, and radio stations across Europe through the EBU (European Broadcasting Union).

Series of lectures on the Russian October Revolution and its impact on Western history.

Dates to be determined.