García Lorca arrives at the Teatro Real “The public” 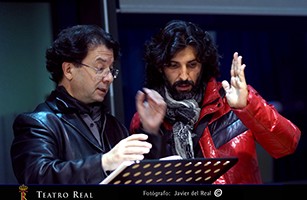 The next 24 February will take place in the Teatro Real the world premiere of The public, from Mauricio Sotelo, with writer's booklet Andres ibáñez, who has rescued for the opera the essence of the homonymous work of Federico Garcia Lorca, written in 1930 in Cuba and premiered in 1986, 50 years after the poet's death.

In El Público, the composer Mauricio Sotelo mixes flamenco with tonal melodies and harmonic textures that go from microtonalism to sophisticated electronic techniques., through which the music will sound from 35 speakers arranged throughout the room.

To give life to thirty characters parading in the opera, the stage manager of Mexican descent Robert Castro has been inspired by the archetype of Mayan identity —In lak’ech, I am another you; hala ken, you are another me— evoking Lorca's worldview in El Público, that hides behind a set of mirrors, More expensive, transformations and allegories that intertwine reality and reverie.

The painter and sculptor Alexander Polzin has conceived the space for García Lorca's initiatory and mysterious journey with nine painted curtains that evoke the iconic Lorca screen and the skyscrapers of New York. In the second part, an immense spy mirror brings the entire audience in the room to the stage and makes them participate in the reflections that arise in the play.

In addition to the different nationalities of the interpreters, going from the United States to Egypt, the artists in the production that will premiere at the Teatro Real come from very different aesthetic and stylistic worlds: from the great names of flamenco to the excellent musicians of the prestigious Vienna Klangforum Orchestra; Broadway choreographer Darrell Grand Moultrie (awarded for his creations for various artists, including Beyoncé) al polish costume designer Wojciech Dziedzic, who works on this opera with the Lebanese Assaad Awad in exploring materials for the performers' costumes.

It will therefore be a multicultural Lorca, with an Austrian orchestra in the pit, flanked by the great guitarist Cañizares, on the left, and percussionist Augustine Diassera, on the right; the voices of the singers Archangel Y Jesus Mendez together with singers like José Antonio López, Thomas Tatzl, Josep Miquel Ramón, Antonio Lozano, Gun-Brit Barkmin, Eric Caves O Isabella Gaudí; and the dancer Ruben Olmo next to the dancers Haizam Fathy, Leonardo Cremaschi Y Carlos Rodas.

Gerard Mortier, who commissioned El Público for the Royal Theater in 2010, he was able to work with the artistic team of the production in the genesis of the dramaturgical project and even got to see the score (singing and piano version) and the canvases of Alexander Polzin's set design before his death.