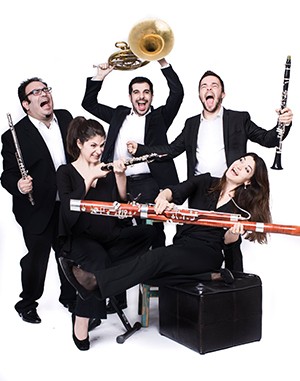 The following days 2, 3 Y 7 of March, the wind quintet Azahar Ensemble, which since its founding in 2010 It has become one of the largest international chamber music formations projection, will perform at the Teatro Liceo de Salamanca, the Philharmonic Society of Valencia, and the Days of Contemporary Music of Segovia. in program, works of Anton Reicha, Maurice Ravel, György Kurtág, Elliott Carter and Joaquin Turina (Azahar Ensemble in accordance to his grandson and composer José Luis Turina, included in his album "Turina x Turina"). further, in the community of the Church of St. Nicholas in Segovia, organized in co-production with the National Center National Broadcasting (CNDM), they will interpret the work Sapur dream, palentino of the composer Santiago Lanchares, commissioned by the CNDM.

True to its commitment to contemporary music, Azahar Ensemble plays frequently large repertoire of the XX and XXI century, and he has premiered Bride of the Wind of José Luis Turina and a Tapestry, l’Unicorn Joan Magrané, works composed expressly for the whole. And soon, premiere in Tbilisi (Georgia) a new work by composer Gija Kancheli, composite wind quintet solo, string orchestra, percussion and piano.