Goyescas and Gianni Schicchi at the Teatro Real 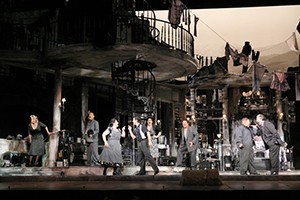 The next 30 June the Teatro Real will premiere Goyescas, from Enrique Granados (1867-1916), first and only opera Catalan composer, with which he triumphed at the Metropolitan Opera House in New York 1918. On his way back to Spain, at the dawn of World War I., the English ship he was traveling in was bombed by the German navy, leaving his life cut short before their 50 years.

This little opera, which will be presented for the first time at the Royal Theater, will be offered in concert version, led by the soprano Maria Bayo, the tenor Andeka Gorrotxategui and baritone José Carbó, who will act together with Headlines Choir and Orchestra of the Teatro Real, under the direction of Guillermo García Calvo, debuting at Real.

Two years before, also at the Metropolitan Opera House, Giacomo Puccini (1867-1916) had premiered his last complete opera, Gianni Schicchi, with which his famous Triptych, after Il tabarro and Suor Angelica, created from the three volumes of the great trilogy of Dante.

This fabulous comic opera will arrive at the Royal Theater in a production from the Los Angeles Opera, with stage director Woody Allen and set design and costumes by Santo Loquasto. It will be starred by baritones Nicola Alaimo Y Lucio Gallo, who will alternate in the interpretation of the title role. They will be accompanied by a mostly Spanish choral cast and by the Titular Orchestra of the Royal Theater, under the direction of Giuliano Carella.

A group of majos and majas have fun under a bright sun in the prairie of San Antonio de la Florida, on the banks of the Manzanares river, in Madrid. Some kept a wimp. The bullfighter Paquiro struts through the crowd and compliments the young women. His fiancee, the popular Pepa, He arrives in a buggy and they both make the court. Rosario also appears, distinguished aristocratic woman who hopes to meet her lover Fernando, captain of the Royal Guard. Paquiro, insinuating, invites Rosario to accompany him to the popular Candil Dance, provoking the jealousy of Fernando, who forces Rosario to go to the dance, but in his company.

The Candil Dance is in full swing. Fernando's arrogant attitude, fueled by Pepa's provocations, does not bode well. Rosario faints, and Paquiro and Fernando take advantage of the incident to challenge each other in a duel that same night. The party comes back to life once Rosario and Fernando have left.

In the garden of his residence, Rosario listens to the song of the nightingale and accompanies him singing a loving melody. Fernando arrives and together they sing a love duo. A bell announces the time of the challenge. Rosario begs Fernando not to go, but he ignores their pleas and goes in search of Paquiro. She, afraid of what might happen, follows him and finds him mortally wounded. Fernando dies in Rosario's arms.

Buoso Donati has died, a rich landowner. His family surrounds his bed, in which the deceased still lies, and deeply mourns his loss, although they show much more interest in the content of their will. Among those present are, among others, Donati's cousins, Zita y Simone, his brother-in-law Betto di Signa and Zita's nephew, Weather in Rinuccio, in love with young Lauretta, daughter of Gianni Schicchi. Given the rumor that Donati has bequeathed most of her inheritance to the monks of the local monastery, the family starts frantically looking for the will to change it. Rinuccio finds him, who before opening it persuades her aunt Zita to, since the family is going to be tremendously rich, let him marry Lauretta.

Family fears are well founded: Donati has bequeathed her inheritance to the monks. Rinuccio suggests asking Schicchi for advice in the face of general reluctance, because he is considered an upstart. Llegan Schicchi y Lauretta, that are received in a hostile way by the family. Finally, Schicchi is agreed to examine the will. After sending Lauretta to the balcony and making sure no one else knows that Donati is dead, Schicchi impersonates him and assures the doctor, on medical visit, that is much better. The doctor leaves and Rinuccio goes to look for the notary while the family fights over the distribution of Donati's assets. Schicchi dictates a new testament to the notary in which, before the fury of the relatives, grants the best assets to "my loyal friend Gianni Schicchi". On the terrace, Rinuccio and Lauretta declare their love already exempt from barriers, since Lauretta now has a juicy dowry.