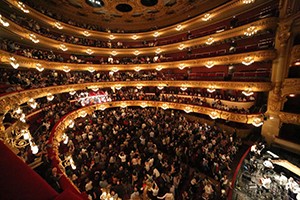 He Gran Teatre del Liceu Barcelona presented last 27 February new season 2015/16. With her, Theater strengthens its role as artistic reference in the level of their productions, many innovative, and the quality of their voices, with a world debut. In many cases, programming comes to fill empty historical, with premieres of titles.

The budget of the season will be 41,5 millions of euros, in front of 40,2 million current, with a re-balancing of accounts, for the first time, will reflect a slight surplus: 123.000 euros, thus fulfilling the Strategic Plan 2014-2017.

The season, which is again from September to July- increases in number of functions, passing of 108 a 114 and the number of titles opera remains: 12.

The official opening of the opera season will be the 7 October with Nabucco, in a co-production of the Gran Teatre del Liceu with the Teatro alla Scala in Milan, the Royal Opera House Covent Garden in London and the Lyric Opera of Chicago. Among its cast, destaca Ambrogio Maestri, winner last season with Tosca, and the stage director Daniele Abbado.

Then, if programará Benvenuto Cellini, Hector Berlioz, an opera that has been performed only once at the Liceu, season 1977. This work comes from the hand of Terry Gillam, one of the founders of the legendary Monty Python, with an innovative scenography. The play, produced by the Inglés National Opera (ONE) and the De Nederlande Opera Amsterdam, just got an overwhelming success in London. The orchestra will be led by music director of the Liceu, Josep Pons.

In December, Lucia di Lammermoor will come, de Gaetano Donizetti, where the world debut of tenor Juan Diego Florez will occur in the role of Edgardo and will be joined by Elena Moşuc, among others. In the scenery it features a huge glass tower tilted, located on stage, in an opera musically directed by Marco Armiliato and stage director Damiano Michieletto.

Another highlight of the season will be the representation of two Otello: the Verdi and Rossini, hand of the two most renowned tenors in the title role: Aleksandrs Antonenko and Gregory Kunde (the Pollione in Norma this season).

Likewise, the Teatralogía Wagner closes with Götterdämmerung (Twilight of the Gods), con Irene Theorin, Lance Ryan and best Wagnerian voices of Bayreuth. The musical direction will be borne by Josep Pons.

The Liceu will host the premiere in Spain of Written on skin (Written on Skin), XXI century opera, which premiered three years ago in Aix-en-Provence has become a reference worldwide. The opera, in semi-staged version, It will be led by its own composer: George Benjamin.

Also it will release all Serse Handel, which you have never seen at the Liceu. This baroque opera, concert version, It will be interpreted by one of the best formations in the genus, el Ensemble Matheus, on period instruments.

The season will host a special celebration: that of 50 years after the debut of Placido Domingo, acting in Simon Boccanegra, in Verdi, with a cast that includes Leo Nucci and Giovanni Meoni, in-house production of the Liceu and the Grand Théâtre in Geneva.

A star cast will be in Capuleti e i Montecchi I, Bellini, an opera-represented in the Liceu, which will feature the voices of Elina Garanca, Silvia Tro Santafe, Patricia Cioffi y Ekaterina Siurina. The clothing bears the stamp of the French designer Christian Lacroix.

One of the operas most appreciated by the public of the Liceu, Puccini's La Bohème, It can be seen in the months of June and July, in a new production at the Liceu in the Inglés National Opera and Cincinnati Opera, under the direction of Jonathan Miller scene, one of the innovators of modern lyrical scenery. The cast will be seen Viñas Contest winner this year, Ukrainian Olga Kulchynska, a commitment to new voices.

It will close the season Die Zauberflöte (The magic Flute), Mozart, with an innovative aesthetic reminiscent of silent film of the year 20. The production comes from the Komische Oper Berlin, which it has triumphed in several countries.

The dance program includes two reputed companies: the National Ballet Inglés Tamara Rojo, who will perform Swan Lake, and the National Dance Company, under the direction of José Carlos Martínez. In both cases, music will be performed by the Symphony Orchestra of the Liceu.

The National Company debut at the Liceu his Homage to Granados and then offer contemporary choreography, including Jerome Robbins, William Forsythe and the director of the company itself.

This chapter highlights the concert by Italian director Riccardo Muti, who will play Mozart with a membership of "Luigi Cherubini" orchestra and the Orchestra del Liceu, acompañamiento with the piano Ignasi Cambra.

An attractive proposal will be the American actor John Malkovich, who will perform Beethoven Egmont, based on the classic Goethe, in a program that includes the Symphony No. 7 German genius.

Orchestra del Liceu, under the baton of maestro Pons, will perform his symphonic works program linked to opera and music titles from other genres, like film. In the case of a concert about Wagner (with works linked to Star Wars, Indiana Jones and The Lord of the Rings) and another about Romeo and Juliet. The symphonic cycle will be completed with a program dedicated to Mendelson and Tchaikovsky to be held at L'Auditori.

At Christmas, The schedule is Volvera Shepherds, Nadal cantata, Albert Guinovart, after the success achieved in the last edition, when the Liceu had own programming at this time. Pau Casals Memorial will be continued with the Pessebre, Casals own, with texts by Joan Alavedra and interpretation of the Theater Orchestra and the Polyphonic of Puig-Reig.

In the chapter of great voices, Concert highlights the mezzo Joyce DiDonato, who just won with Maria Stuarda, the concert with Diana Damrau, which will perform works by bel canto, and the concert baritone Christian Gerhaher, one of the main lideristas the moment and won the award for best recital 2014 Campoamor Awards.

Programming for younger renewed next season, although some of the most popular shows are held by the public, The Seville as superbarber, William Tell and The houseboat.

It highlights the premiere of a show: Aria kadabra, a new production of the season Liceu where adults will be explained to children through illusionism and magic, a show that intends to continue in coming seasons.

Likewise, The bird is prodigious debut, The company Maquiné, a puppet show based on the legend The Firebird by Igor Stravinsky.

By last, a dance recovers: Minus 16. A ball, de IT dansa, the Company's Institut del Teatre, with the intention to introduce the smallest in the world of dance.