Gustavo Gimeno debut in Ibermúsica with the Luxembourg Philharmonic Orchestra 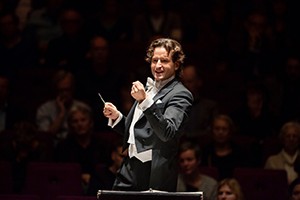 The Luxembourg Philharmonic Orchestra and its chief conductor, Valencian Gustavo Gimeno, will perform next 2 November within the 47th season Ibermúsica. In the concert, which will take place in the Auditorio Nacional de Madrid, the orchestra and the young teacher, considered one of the rising figures of the musical direction at European level, They will be accompanied by the violinist Patricia Kopatchinskaja and will perform pieces from some of the brightest Russian composers: Night in Monte Pelado, from Mussorgsky; Violin Concerto, from Chaikovski; Y The Rite of Spring, from Stravinski.

Gimeno - which will also act in Valencia, Zaragoza and Alicante in the days 3, 4 Y 5 of November -, I stood in front of the great Luxembourg formation last season. Before disembarking at this institution, He had been assistant Mariss Jansons in the Royal Concertgebouw Orchestra, one of the five best teams in the world and worked as assistant Claudio Abbado with Mozart Orchestra, la Lucerne Festival Orchestra y la Mahler Chamber Orchestra. But they have not been the only two figures that have shaped him. In 2013, was assistant Bernard Haitink, again with the Orchestra Mozart Bologna.

further, the outstanding violinist Patricia Kopatchinskaja will address the master Violin Concerto de Chaikovski. Critics have said that it has "something more important than brilliant technique. It's called character”. And that treasures “a formidable talent and boundless energy, permeating the musicians that surround the power of multiple musical possibilities“.

The 47th season Ibermúsica , in which this scheme fits, started last 24 June with the opening concert of the Vienna Philharmonic. Since then, and until May 2017, Programmed Ibermúsica 25 concerts 12 of the best orchestras in the world.

THE PHILHARMONIC ORCHESTRA OF LUXEMBOURG

The orchestra of the Grand Duchy, the Luxembourg Philharmonic Orchestra (OPL), It represents a very dynamic part of the culture of their country. Since its debut in 1933 under the auspices of Radio Luxembourg (RTL) and directed by Henri Pensis, the orchestra has been present throughout Europe. Publicly administered from 1996, OPL has been a resident of the Philharmonie Luxembourg, one of the major concert halls of Europe, and both form a single body from 2012. The acoustics of residence has been praised by great orchestras, conductors and soloists from around the world.

Close collaboration with great musical personalities, He has contributed to making the OPL a formation known for the elegance of its sound. His position has been confirmed by an impressive list of awards from twenty recordings in recent years: Grand Prix Charles Cros, BBC Music Choice, and several Diapason d'Or, Shock the World of Music, Pizzicato Supersonic, Classica R10 and many others.

Gimeno (Valencia, 1976) He took office the Luxembourg Philharmonic Orchestra season 2015/16. His international career as a director began in 2012 Assistant working for Mariss Jansons with the Royal Concertgebouw Orchestra, where he has been percussionist between 2001 Y 2013. It was at the forefront of this powerful training where he made his directorial debut 2014. Likewise, was assistant to Claudio Abbado for years with Mozart Orchestra, Lucerne Festival Orchestra and Mahler Chamber Orchestra. In 2013 also attended Bernard Haitink with Mozart Orchestra. His work alongside these outstanding mentors - to which must be added his training with Ed Spanjaard, Hans Vonk and Ivan Fischer - has had a profound impact on your career direction.

With the Luxembourg Philharmonic Orchestra, It begins its collaboration focusing on the early symphonies of Beethoven, Mahler, Bruckner, Schumann and Shostakovich and directed the Requiem Verdi with the choir of Wiener Singverein. In the contemporary field, He has directed works by Rihm, Berg y Berio. Some of the soloists with whom he worked in his first season at the helm of the Luxembourg group are Isabelle Faust, Frank Peter Zimmermann, Leonidas Kavakos, Anja Harteros y Stefan Dohr.

In spring 2015 She debuted at the Palau de les Arts in Valencia directing Rule Bellini, in a new production of Davide Livermore. Gimeno has worked closely with many composers among those found Theo Loevendie, Jacob ter Veldhuis, Pierre Boulez, Peter Eötvös, George Benjamin and Francisco Coll.

Kopatchinskaja (Chisinau, Moldavia, 1977) descends from a family of musicians. He began playing the violin at age six and has performed with the major orchestras of Europe and the Vienna Philharmonics, Berlin or London. Its versatility is evident in its varied repertoire, It is ranging from the baroque and classicism to commissioned works and new interpretations of modern masterpieces.

In season 2016/17, They include concerts season opening of the new SWR Symphony, with which he has interpreted the Violin Concerto Doremi but Peter Eötvös, under the baton of the composer himself, and a performance with the NDR Orchester Elbphilharmonie in the inaugural concert of the concert hall of the Elbphilharmonie in Hamburg. He has also made his debut with the Rotterdam Philharmonic with Krzysztof Urbanski and Gothenburg Symphony. Among his plans he is to continue their usual collaboration with the London Philharmonic Orchestra, with performances in London and New York with Vladimir Jurowski. More extensively, will perform the Violin Concerto de György Ligeti con la Berliner Philharmoniker y Sir Simon Rattle, the Filarmonica della Scala and Andrés Orozco-Estrada, and the Finnish Radio Symphony Orchestra and Teodor Currentzis.

This season, violinist is also Artist in Residence in three major halls and festivals in Europe: in the Berlin Konzerthaus, Wigmore Hall in London and at the Kissinger Sommer Festival. Also it undertakes several European tours with the Orchestre Philharmonique du Luxembourg, Wiener Symphoniker y Musica Aeterna. As for chamber music, a genre just as important to her, Kopatchinskaja usually acts with artists such as Markus Hinterhäuser, Polina Leschenko, Anthony Romaniuk and Anu effect, in such prominent venues as Berlin Konzerthaus, Wigmore Hall, Vienna Konzerthaus and Amsterdam Concertgebouw.

Prolific recording artist has just released a new album that deals Death and the Maiden de Schubert con la Saint Paul Chamber Orchestra, formation is Artistic Collaborator. He is the winner of Gramophone Award (2013), ECHO Klassic Award and was nominated for a Grammy in 2014 the album dedicated to works for violin and orchestra Béla Bartók Hungarian authors, György Ligeti y Peter Eötvös.

His violin was made by Giovanni Francesco Pressenda in 1834.