Haendel and The King's Consort in Madrid 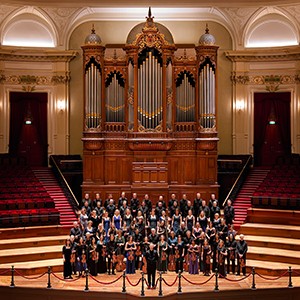 He Sunday 25 March at 19 hours, the cycle Universe Baroque Music National Broadcasting Center (CNDM) It presented in Symphony Hall of the National Auditorium Music of Madrid the two most exuberant and festive works of Haendel: water music Y Music for the Royal Fireworks, Mythical hand set The King´s Consort, directed by Robert King. The suites water music They were prepared by the composer from the writing for a cruise down the Thames from King George I in July 1717. The Music for the Royal Fireworks was born joined to another royal ceremony, the celebration in 1749 La Paz of Aix-la-Chapelle. These two key pieces of Baroque Suite last tragedies will join music of Rameau, the Boréades, work that is not represented in the author's life and left after the first trial.

The exuberant music for kings
According to account Pablo vayon: “They have been several testimonies of the spectacular party on the Thames that King George I of England held 17 July 1717 and for which Haendel, installed in London five years before, He wrote a series of pieces that eventually would be grouped under the generic title Water Music. No autograph manuscript has survived and editions that were published throughout the eighteenth century did not match either the number or specific parts that could be interpreted, so Robert King has used two key transcriptions published in the early decade of 1720, one due to John Christopher Smith, would become faithful secretary and copyist Haendel, to get as close as possible to the original provision. The character of the Music for the Royal Fireworks It is also festive course. Handel composed for the celebrations by the Treaty of Aix-la-Chapelle that ended the War of the Austrian Succession in October 1748, although the party, which it was held in Green Park, It took place in April next year. The autograph score shows that the first interpretation of this music, which also fits the model of the suite of dances to French, I had to be a superb sound event, because the orchestration includes nine trumpets, nine tubes, twenty four oboes, sweet bassoons (including a contrabassoon) and three pairs of timpani, and an unspecified number of drums. The strings must be added for further interpretation, cover, en el Foundling Hospital. In both cases we talk about music of great brilliance, Haendel in which melted the principles of the Italian and French traditions.”

Considered one of the most important groups of period instruments World, the orchestra The King’s Consort y el Coro de The King’s Consort, They were founded in 1980 by Robert King and they have toured five continents, being their presence is common in almost all European countries, Japan, Hong Kong and the Far East, and North and South America. For more than three decades, The King's Consort has presented a wide range in their repertoire, since 1550 to the present day, in major music halls. Notably seven appearances at the BBC Proms, representations of the spectacular King George II Coronation, Venetian replacement I Sposalizio, the Mass in B minor and the St. Matthew Passion Bach, Elijah Mendelssohn (played throughout Europe), representations The Fairy Queen Purcell in Spain and Britain, the opening concert of the year celebrations Purcell on TV and BBC Requiem Mozart at the Alhambra in Granada. Other operas carried scenarios have been Handel Ottone in Japan and Britain, Exio Haendel at the Theater of the Champs Elysees in Paris and Purcell The Indian Queen in the historic theater in Schwetzingen in Germany. Other tours have included concerts and operas in Japan, Hong Kong and the Philippines, Mexico, Brazil and Argentina and across the United States and Canada. Of her recent performances include Dido & Aeneas Y King Arthur Purcell in Barcelona, Madrid and Vienna, Coronation of King George throughout Europe, the Mass in B minor in Lucerne, The Messiah Haendel at Versailles, Annecy, La Chaise-Dieu and Marseille, the Illuminatios Britten at the Wigmore Hall and in France, Mendelssohn en la Gewandhaus de Leipzig, and tours of France, Hungary, Malta, Romania, Switzerland and Spain. The season 2016/17 It included an extensive tour The Messiah Haendel, Vespers Monteverdi and I Sposalizio in the Rheingau Festival, Juditha Triumphants en Viena, Amsterdam and Versailles and a tour of six concerts in Spain with music by Purcell and Shakespeare's time, as well as concerts in Belgium France, Germany and the Netherlands.

Recordings of The King's Consort have been widely praised, They have received many international awards and sold over a million and a half copies. The orchestra now records for VIVAT brand and specializes in the music of Handel and Purcell; but its extensive catalog includes instrumental and choral music of composers from Albinoni to Zelenka, including the Mass in B minor of Bach, Petite Messe Solennelle by Rossini, Twenty-five previously unreleased recordings of the complete Purcell Odes of his songs and his sacred music; This has made The King's Consort in the world's leading orchestra in playing this author. TKC is also renowned for his recordings of more than a dozen Handel oratorios and operas. Other projects include the recording of sacred music of Monteverdi, ten volumes of the complete sacred music of Vivaldi, A recording of the Coronation of King George, Ode for St. Cecilia of Handel, Michael Haydn's Requiem (winner of the "Best Choral Recording" BBC Music Magazine) and the sacred music of Mozart soprano Carolyn Sampson with. Edited with a hundred CDs and more than one and half million sold, The King's Consort is one of the world's orchestras historical instruments recorded. TKC Choir has participated in the music of Hollywood films like The Kingdom of Heaven de Ridley Scott, the Chronicles of Narnia, Pirates of the Caribbean, Ratónpolis Y The Da Vinci Code.