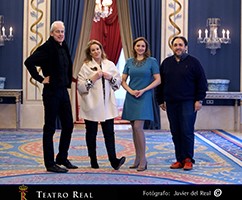 He Teatro Real begins this new year with the premiere of the opera Hansel and Gretel, from Engelbert Humperdinck, of which nine representations can be seen, between 20 January 7 February, with musical direction Paul Daniel and an ironic and funny production of Laurent Pelly, designed for the Glyndebourne Festival and whose premiere, in 2008, received high critical acclaim and a warm reception from the public.

Based on a story by the brothers Grimm, with libretto by the composer's sister, Adelheid bet, the opera has an effective dramatic structure and characters described with ingenuity and skill, who will tell about the scene with a cast of outstanding voices well known by the Madrid public. A) Yes, the two brothers will be represented by the mezzoprano Alice Coote (Hansel) and the Spanish soprano Sylvia Schwartz (Gretel), the parents of the little ones will be the baritone Bo Skovhus (Peter) and mezzosoprano Diane Montague (Gertrud) and the wicked, but also hilarious witch in this production, will be performed by the tenor José Manuel Zapata. The fairies of the story will have a voice in the sopranos Ruth Rosique (dew sprite) Y Elena Copons (sleep elf).

The Principal Choir and Orchestra of the Royal Theater and the Little Singers of the JORCAM, complete the artistic team of this production, that in the function of the day 27 January will feature the musical direction of Diego Garcia Rodriguez.
The scene conceived by Laurent Pelly, also responsible for the costumes, with the brilliant collaboration of the scenographer Barbara de Limburg, offers a colorful image, dynamic, pleasant, which is actually an instrument to make a serious critique of contemporary society, focusing on issues such as scarcity and excess, destruction of the environment and ecology, abandonment and affection… With ingenious irony, the brothers' home becomes a huge cardboard box in the middle of a pollution-ridden forest and the witch's house, gingerbread in the original, stands with supermarket shelves overflowing with junk food, with its colorful plastic wrappers. A pantomime loaded with gestures of extraordinary knowledge of theatrical language.

Hansel and Gretel is, definitely, the best known work, possibly, the best realized of the German composer Engelbert Humperdinck. Born from a Christmas family entertainment, Humperdinck composes a series of songs for a small play written by his sister to be performed by his nieces, the score contains his extraordinary ability to build sound environments and atmospheres and reveals the strong influence of Wagner, whom the author met and with whom he had the opportunity to collaborate.

Hansel and Gretel's music is an amalgamation of popular songs, beautiful and descriptive orchestral landscapes and leitmotifs that alternate and intertwine with authentic mastery. Richard Strauss, responsible for its premiere in Weimar in 1893, called the opera a masterpiece, not in vain has it become a repertoire title in numerous theaters around the world and an essential Christmas in Germany.

Parallel to the premiere of Humperdinck's opera, Various activities have been organized, inside and outside the Royal Theater, that complement the programming. The National Library of Spain has inaugurated a creative and seductive exhibition last December, open throughout the month of January, under the name La casita de chocolate, offers a sample of books and illustrations about the popular tale.

On Thursday 15 from January, to 20.30 h, a new Focus session will take place in the Gayarre Room, in which Paul Daniel will participate, James Bonas, Sylvia Schwartz, Alice Coote, José Manuel Zapata, Ruth Rosique, Elena Copons and Joan Matabosch. And Sunday 1 February, to 12.00 h in the main room, within the cycle The Chamber Sundays, the soloists of the Royal Theater Orchestra will offer a program dedicated to Richard Strauss.