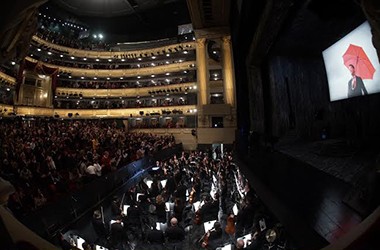 "Beautiful things are difficult". This simple phrase of Plato's Republic, Video presentation served as a tribute to the Royal Theater has offered Gererd Mortier, who was artistic director from 2010. An accurate phrase to define its Madrid.

Replacing one of the traditional approaches, Mortier creation itself, and clothed by the scenery of Lohengrin, one of his last productions for the theater that represented these days, a large screen where a video made by theater technicians deployed projected. Without falling into sentimentality, but with great emotional charge, They were popping images and music from some of his most representative productions during his stay in Madrid. We could also see the unveiling Mortier own the keys to his life and musical philosophy, the passion. That passion approached him when he was eleven years to attend a performance of "The Magic Flute" and that he would never abandon him.

After the screening Video, German Hartmut Haenchen took his place in the pit to lead the Titular Orchestra of the Teatro Real. Thus began the musical part, the prelude to Wagner's opera to premiere these days, Lohengrin. German soprano Anne Schawanewilms was the first to take the stage to perform the aria "Einsam in Truben Tagen", followed by German-Canadian tenor Michael König, which has “hear the invisible” to never forget the pianist Mack Sawyer, He has played a part of Franz Schubert, and baritone Vito priato, con el pianist Riccardo Bini, He has sung an aria from Tannhauser, before the members of the Coro Titular del Teatro Real, to the orders of the director Andres Maspero, scenography created to occupy and interpreted Lohengrin one of those great choruses of Verdi, Patria oppressed, opera Macbeth, with pianist Miguel Angel Arqued also on stage.

One of the most exciting moments of the night was when the Canadian soprano, Measha Bruggerbergosman, barefoot and a capella, He has interpreted the spiritual "Going up Yonder", filling the room with its stunning and shocking harmonics.

The tribute ended with a sentence of Olivier Messiaen, “hear the invisible, never forget ".

Mortier intended, Upon arrival in Madrid, attract new audiences to the theater. Making theater and opera channel communication and reflection. Today, on the occasion of this tribute, the Royal Theater and this representation many people have come first. Seeing the look on their faces, certainly they have been fascinated. Maybe they trapped forever by a passion. beautiful heritage. As Gregorio Maranon to Mortier said in his letter, mission accomplished…