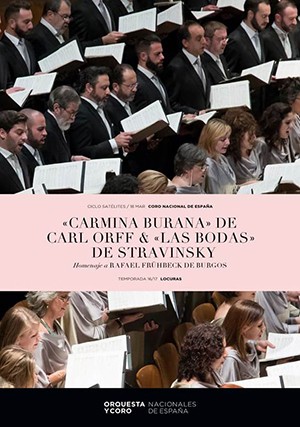 The National Choir of Spain, under the direction of Miguel Angel G. Cañamero, pays tribute to the maestro Rafael Burgos Frübeck.

Saturday 18 of March, the National Choir of Spain presented, under the direction of Miguel Ángel García Cañamero, the works "Carmina Burana" by Carl Orff and "Las Bodas" by Igor Stravinsky in a concert Tribute to Rafael Frühbeck de Burgos since the next 11 June marks the third anniversary of the teacher's death, one of the great Spanish directors with the greatest projection outside our borders.

The National Choir of Spain, who was born and debuted under his steadfast baton in 1971, wants to pay a special tribute to Rafael Frühbeck de Burgos with this extraordinary concert and with “Carmina Burana” by Carl Orff, version for two pianos and percussion, great choral work very relevant in its repertoire and inseparable piece throughout his career since he premiered it in 1960. Likewise, It was the last work that the Spanish National Choir performed and recorded under his direction in December 2012.

Ticket offices of the National Auditorium and the INAEM theater network