Teresa Berganza tribute to the Zarzuela 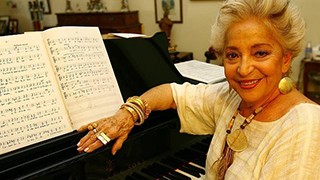 "He personifies the traditionalism of zarzuela, rigor and Mozart, Rossini freshness and grace and passion of Carmen ". Well they presented last 17 in December Teatro de la Zarzuela a Teresa Berganza. In a tribute to this theater he wanted to pay in the dress rehearsal of The bunch of roses, played after students represented these days in the Zarzuela. The surprise was attended on the scene of some of his best friends. Maria Bayo, Luz Casal, Maestro Antón García-Abril, baritone Ruggero Raimondi and tenor Luigi Alva. These two have been two of his top lieutenants on stage throughout his long career.

some images, definitely, exciting and endearing. And that Tersa Berganza was born castiza, in the number 13 Street San Isidro, And since then it has been unconditionally from his Madrid audience.

In an interview with the newspaper El Mundo, of which we reproduce part, he realized ago 14 years, It is clearly reflected his character and energy, with a fresh voice clear brook, They have made it one of the largest. “My voice is my lover: joy and I suffer for it. I've always lived in love, but even my love for a man has been as big as my love of music. Only my children are above”. “(….) reincarnated, Teresa Berganza would in. “But not commit the folly of marrying and divorcing twice. I do not know what happens to me when I sign a pledge. Sometimes I feel that I am signing a death sentence”. In 1957 He married his pianist Felix Lavilla, with whom was “Extremely happy” during 20 years and had her three children: Teresa, which she has given her two granddaughters and is a housewife; Javier, dedicated to recording classical CDs, and Cecilia, lyric soprano. After divorce, He relapsed with the priest José Rifá, which ended up retaking habits. “And of course, one is shocked. With the Church I am a bit skeptical”. Now cares for her “loving voice” a peaceful life. “What I like about this world is to get up leisurely; I can sleep 12 followed hours, something that is also very good for my skin. I have very low voltage, and until I get myself I need pampering. After I read the press, but I refuse to wake up with a bomb in Israel. Celebrity magazines ever attract me less. I think: What I care about the life of this elementa? Once standing, Slack slightly: my great shower, my great massage, my phone calls. In the afternoon I do gymnastics, trial by the piano, I teach my students at the School of Music Reina Sofia (he inherited the chair vacated Alfredo Krauss, `A man worthy to die in the way '), stroll through the fish market around the monastery, I do yoga, I listen to Vivaldi, Mahler or Mozart, as is the mood. Since I live here I read more History of Spain; It seduces me a lot Juana La Loca. Before going to bed, around ten, I love me contrast baths for my tired feet and put on my mask. It must have willpower to continue living as well”, He concludes the sweeping account of his daily chores with a theatrical sigh of satisfied diva. " (The world).