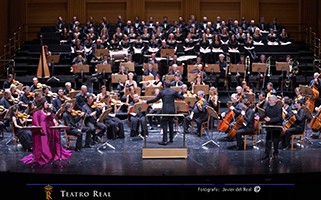 I due Foscari (The two Foscari), from Giuseppe Verdi (1813-1901), bring to Real, again, the archetypical father verdiano, suffering and tormented, after those of Rigoletto Y Luisa Miller, both starring Leo Nucci this season.

This time the role of the parent, written, as mentioned, for string baritone, will be interpreted by Placido Domingo, who has triumphed in several theaters incarnating the old Francesco Foscari, whose tragic end is one of the saddest and most lacerating of all Verdi's production.

At his side will be the American tenor Michael Fabiano, that will return to the Real, already internationally consecrated, after having acted in Cyrano de Bergerac in the season 2011-2012, and soprano, also North American, Angela Meade, which will debut in Madrid preceded by great successes in Europe and America.

Based on the historical drama The Two Foscari, from Lord Byron, the score by Giuseppe Verdi, part of the political intrigues and power struggles in the former republic of Venice, to delve into the psychology of the main characters, anticipating his later operas. The play, one of Verdi's darkest scores, reflects, maybe, the composer's mood, that he had lost his wife and children in a short period of time.

In the music of I due Foscari we can find the almost embryonic use of the Wagnerian leitmotifs and precursor elements of Verdi's later style, especially in the pages of Lucrecia, the devoted and feisty wife, and in his magnificent duets with the Doge.

Today this work is witnessing a revaluation promoted by Plácido Domingo, who has performed it in different productions and in concert version in Los Angeles, Valencia, Vienna, London, Barcelona and Milan.