I Puritani at the Teatro Real 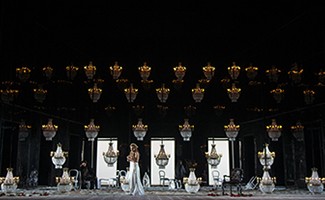 The next 4 of July will arrive on the stage of the Royal Theater I puritani, last opera by the Italian composer Vincenzo Bellini (1801-1835), of which will be offered 10 functions until the day 24 of July, in a co-production of the Teatro Real and the Municipal Theater of Santiago de Chile with stage direction of Emilio Sagi and musical of the Italian master Evelino pido.

I puritani marked the debut of Bellini in Paris, where it was released in 1835 at the Théâtre-Italien with a resounding public success. In it are the best ingredients of the Italian melodrama of romanticism: historical drama, love, jealousy, political intrigue, madness ... built on a score in which the orchestration is richer than in previous works by the composer, but where he does not renounce sublime melodies, heroic hymns and arias and duets of difficult coloratura.

Emilio Sagi, head of stage direction, in this production he moves away from a realistic version of the libretto to focus on the abstract world of daydreaming and feelings. In this dream world, portrayed in black and white, dotted with surreal elements, it will be the voices that convey the dramatic reality through melodies that convey more than words. To Sagi, the score I puritani it's crystal clear, romantic, sublimates emotions and is full of sensuality, for that reason it strips the space of all realism and focuses it on music and voices.

As on other occasions, Emilio Sagi has had some of his regular collaborators, which the Real public has always received with great enthusiasm in productions such as Le nozze di Figaro, The Barber of Seville O Luisa Fernanda, among other. Daniel Bianco takes over the scenery, Peppispoo (Pepa Ojanguren) designs the costumes and Eduardo Bravo directs the delicate lighting in this co-production signed by the Teatro Real and the Municipal Theater of Santiago de Chile, where at its premiere in May 2014, received numerous accolades.

Representations I puritani will coincide with the celebration of the Week Opera Theater Royal, that will take place between 11 and the 17 July and what, between scheduled events, will broadcast on the screen installed on its facade the function of the day 14. This broadcast can also be followed live in some of the most important cultural spaces in Spain such as the Prado Museum, he Reina Sofia Museum, he Niemeyer center Aviles, Bilbao Guggenheim Museum Y The Alhambra of Granada, among others. further, the audiovisual platform of the Teatro Real, stage Digital, will offer representation in streaming, for free, for all those who cannot approach the Plaza de Oriente.