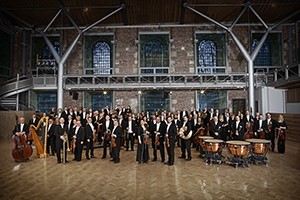 The 47th season Ibermúsica restarts, after the summer break, its program of concerts with two quotes London Symphony Orchestra, one of the best and most prestigious musical groups in the world. British training, acting day 13 Y 14 September under orders Gianandrea Noseda, will address parts Wagner, Verdi, Haydn Y Shostakovich, among others.

During his more than 100 years of life, the LSO has carried out its commitment to translate the best music to as many people. In this way, the set is known by the general public after setting music mythical films, as the saga Star Wars, and other popular as Dusk O Braveheart; and he has participated in the famous disc The Beatles, Sgt. Pepper’s Lonely Hearts Band.

In the first of the events that are within the 47th season Ibermúsica, the LSO will perform Die Meistersinger von Nürnberg, Wagner; The sea, from Debussy; and the symphony No.. 5, Shostakovich, one of the most popular compositions by Russian author. The program contains the second day Sicilian Vespers, from Verdi; and the Concerto for Trumpet and Orchestra in E flat major, Hob. VIIe / 1, from Haydn, the only concert he composed for this instrument, who will be played by the talented Philip Cobb. Closes the program 14 September the symphony No.. 2, from Rachmaninoff.

Independent and autonomous, LSO was founded in 1904 by a group of the best musicians in London. Today, the orchestra maintains one of its fundamental characteristics: It is still owned by its members, who voluntarily elect their directors. His distinctive sound emanates from the cello and the virtuosity of the 95 bright international musicians who currently make up.

It is resident orchestra at the Barbican Centre, located in the City of London, where it provides an average of 70 symphonic concerts a year, and it performs so many thanks to the tours undertaken by different countries on five continents. This group works with a family of artists that includes great directors like Sir Simon Rattle, as musical director elected; Gianandrea Noseda y Daniel Harding, as principal guest conductors; Michael Tilson Thomas, Director Laureate; Y André Previn, as Emérito.

The LSO develops numerous projects to try to take their music to the public. A) Yes, its educational program LSO Discovery about the work of the orchestra to all sectors of society and is related to 60.000 people every year. On the other hand, LSO Live their stamp (He launched in 1999 and it was the first of its kind) It transmits its music to millions of listeners around the world.

Noseda is currently one of the most prestigious conductors of his generation. In 2015 He was named teacher of the year Musical America and he was elected by the members of the LSO as guest conductor. In his musical career, It highlights the work he did in front of the Teatro Regio di Torino, where he began work on 2007 and he marked a before and after in the institution, which today enjoys a great international prestige

As for his relationship with the LSO, Noseda directs this historical ensemble regularly both Barbican and tours; as it does with the NHK Symphony, The Philadelphia Orchestra, and Scala orchestras and Wiener Symphoniker. It maintains an important link with the Metropolitan Opera, where he has headed numerous productions, among which the innovative and recent Prince Igor, with Dimitri Txerniakov as stage director, subsequently released on DVD by Deutsche Grammophon. Among his upcoming commitments, He emphasizes his debut with the Berlin Philharmonic, as well as at festivals in Salzburg and Aix-en-Provence..

Italian is an exclusive artist of Chandos and his discography includes more than 40 recordings, many of them awarded. Your project Italian music, initiated ago 10 years, He has uncovered great works of twentieth century Italian repertoire hitherto unknown. With the Vienna Philharmonic and the orchestra of the Teatro Regio has recorded with renowned singers, as Ildebrando D’Arcangelo, Rolando Villazon, Anna Netrebko (German Grammophon) Y Diana Damrau (Warner Classics). Noseda has sido como distinguido Officer of Merit of the Italian Republic on contribución por la vida de su país natal artística.

This early and was named outstanding musician trumpet soloist with the London Symphony Orchestra 2009, with only 21 year old. It belongs to the fourth generation of a family of musicians Salvation Army. Since childhood acted solo cornet, with his brother and parents. He joined the Youth Brass Band of Great Britain 2000 Y, later, the International Salvation Army Band. In his prolific career he highlights his performance as guest soloist at the London Olympics 2012.

While she is studying at the Guildhall School of Music and Drama in London, was student of Paul and Alison Balsom Beniston; He served as trumpet soloist with the European Union Youth Orchestra and began to collaborate with professional groups, como la London Philharmonic Orchestra, London Chamber Orchestra, BBC Symphony y Royal Concertgebouw. He was awarded the prestigious International Maurice André Trumpet Competition, in 2006; and two years later he received the Candide Symphony Orchestra Academy Award the London Metal. In 2009 he joined the LSO.

In addition to his orchestral engagements, It is dedicated with great interest to brass bands and is actively involved in the new Superbrass sets, Eminence Brass y Barbican Brass. He has recorded two solo albums: Life Abundant (2007), with the Cory Band and organist Ben Horden; Y, more recently, Songs from the Heart, with the International Staff Band. He has participated in several soundtracks, including Harry Potter and the Deathly Hallows (parts 1 Y 2), the Twilight Saga: new Moon, The Pirates, Shrek forever, A better life Y The origin of the guardians.