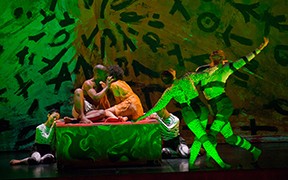 Henry Purcell, through The Indian Queen (the indian queen), returns to Teatro Real after years of absence. A posthumous and unfinished work that evokes a fantastic and allegorical America. It is part of the two visions of the meeting between the pre-Columbian Spanish and American cultures that are to be shown through The Conquest of Mexico, de Rihm, 21st century, y The Indian Queen, Purcell, 17th century.

For this version of Purcell's unfinished work, your stage director Peter Sellars, and the music director, Teodor Currentzis, decided to give this work the ending it lacks. They have fully used the composer's music, original spoken parts and posthumous musical additions omitted.

The end result is made up of all the music of The Indian Queen, other pieces by Purcell and texts by Nicaraguan writer Rosario Aguilar. Conductor Teodor Currentzis has brought in the Perm Opera Choir and Orchestra for this production (MusicAeterna) of which he is artistic director.

Sellars has created a show with a new dramaturgical structure, new libretto and different characters, interspersing the original pieces of The Indian Queen with songs and hymns by Purcell. Creating a magical world, that only Sellars imagination, that carries 25 years thinking about this work in a different way, can create. With this new version, the main purpose of Sellars is to give a voice to indigenous and colonizing women who never appear in the chronicles and official accounts of the time. Events that are always told by men.

The Mexican plastic artist Gronk, has created a scenic space inspired by the colorful Mayan tradition, that evokes the exoticism of the Central American jungle. During performance days, the public can visit, on the sixth floor of the Theater, an exhibition with the sketches and studies made for the panels of Gronk's scenery.