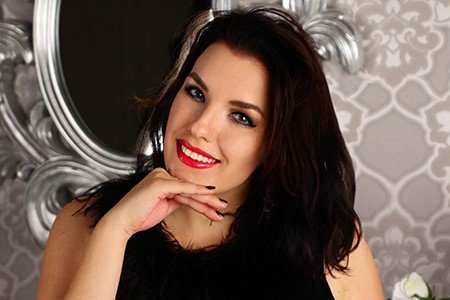 The day 24 May will be the soprano Irina Lévian, Contest winner Nuevas Voces Ciudad de Sevilla 2014, responsible for closing the Young Performers; and she will do it accompanied by the piano for Francisco Soriano.

The soprano Irina was born in Levian 1985, en Krivoy Rog, Ukraine. He studied at the International Academy of Music A. Nezdanovoy en Odessa (Ukraine) and the International Academy of Music P. I. Chaikovsky de Kiev (Ukraine). He graduated from the Conservatorio Superior de Valencia, under the direction of Ana Luisa Chova. He debuted the role of Euridice in Orfeo ed Euridice in Ribarroja Auditorium. For two years she has been a singer at the "Placido Domingo Improvement Center" at the Palau de les Arts in Valencia, He has also participated in the Opera Studio in Gijón and in the ISing Suzhou Festival in China..

In 2016, has debuted in the role of Mimí de Bohemian by Puccini under the direction of Manuel Coves and Davide Livermore, in Palau de les Arts. She played Violetta's role in La traviata by Verdi in various theaters and auditoriums in Spain, including Palau de les Arts with Zubin Mehta in Willy Decker's production (Violetta cover). Has played this role in Castellón, Huesca, Monsoon, Torrent… He has also sung the Requiredem de Mozart in Jaén and Magnificat of Bach in the Great Theater of Córdoba.

During the course in “Placido Domingo Refinement Center” did the cover of Mimi in Bohemian Puccini, under the direction of Ricardo Chailly and Davide Livermore, Cover of Violetta in La traviata of Verdi and Leonora in The force of Destiny with Zubin Mehta and D. Livermore, Oronte's role in Dario's coronation de Vivaldi with Federico M. Sardelli y D. Livermore, Marisa in the zarzuela The African duo by Manuel Fernández Caballero with José Miguel Perez-Sierra and Emilio Sagi. He has also sung in recitals and concerts at the Teatro de la Maestranza, Palace of Congresses of Seville, Manuel de Falla Auditorium of Granada, Palau de la Música, and in China at the Shanghai Filarmonic Hall, Suzhou Auditorium and Gongzou Concert Hall. He has worked with conductors like Zubin Mehta, Riccardo Chailly, Federico M. Sardelli, Manuel Coves, José Miguel Perez-Sierra, Maximiliano Murrali, Andrea Battistoni… and stage directors like Emilio Sagi, Davide Livermore, M. Hummel, S. Martinović…

His future projects include: Requiem in Verdi, at the Auditorio Nacional de Madrid, OpernWerkstatt and various performances in Sigriswill auditoriums and theaters, Bern, Basel or Zurich in Switzerland. Recitals with orchestra, as in the Auditorium of E. Nivelle with the Malaga Philharmonic Orchestra and concerts in Logroño.

Natural of Seville, completes higher piano studies at the Royal Conservatory of Madrid and awarded a scholarship by the Ministry of Foreign Affairs, Government of Poland and Junta de Andalucía, Postgraduate studies at the Frédéric Chopin Higher Academy of Music in Warsaw.

He has supplemented his training with the advice of important teachers, like Boris Berman, Edward Wolanin, Josep Colom, Joaquín Achúcarro, Bruno Canino Pascal Rogé among others.

He has offered piano recitals throughout Spain and in Poland, and currently vocal accompaniment and Chamber Music occupy most of his artistic activity. Since 2002 He is a professor of piano, and currently occupies the position of singing repertorist at the Conservatorio Superior Manuel Castillo de Sevilla.

He regularly collaborates with prestigious singers, as well as with young promises, together with those who develop an intense career as accompanist and "coach" repertoire, offering frequent recitals and concerts in important auditoriums and festivals, such as the Cádiz Spanish Music Festival, Auditorio de Zaragoza (Philharmonic Society Cycle), Teatro de la Maestranza, Royal Palace "Lazienki" in Warsaw or Teatro Comunale in Lodi, among others.

He regularly collaborates in Masterclasses of prestigious singing teachers. He has been a repertoire teacher for the Young Choir of Andalusia, and is the official pianist of the prestigious ASAO International New Voices Competition (Seville Association of Friends of the Opera).

In the field of contemporary music, collaborates with “Zahir ensemble” in concerts throughout the Spanish geography (Badajoz and Bilbao Conservatories, University of Salamanca, Central Theater, CICUS of the University of Seville…)

He is artistic director of the company “Ópera de Cámara de Sevilla”, specialized in the recovery of unpublished or few frequented titles of chamber opera, and whose recent production of Cinderella de Pauline Viardot, It has been very successful in the XIV Cádiz Spanish Music Festival. This company will participate in April in the Spanish premiere of The fall of the house Usher de Phillip Glass, collaborating with "Zahir Ensemble" at the Teatro Central in Seville.