Israel in Egypt by The Sixteen: Haendel at the gates of Holy Week 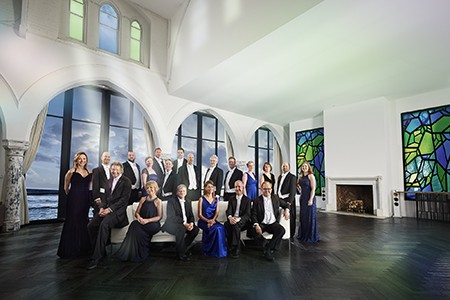 The next Sunday 14 of April, National Dissemination Center Musical (CNDM) receives in its cycle UNIVERSE BAROQUE, scheduled in the Symphony Hall of the National Music Auditorium in Madrid, a Harry Christophers in front of a whole The Sixteen. This time present, at the gates of Holy Week, one of the most valued oratorios by Handel, Israel in Egypt, premiered in Haymarket 1739 and highlighted by the considerable weight of its wonderful choral numbers.

The Sixteen choir and orchestra of period instruments are now among the best teams in the world, interpreters sublime Renaissance music, Baroque and modern coral, backed by critics worldwide for their precise interpretations, full of power and passion. The Sixteen thanks to training as a cathedral choir and choirmaster of its founder and director Harry Christophers was formed. Her project, launched in 1979, It was based on the best of British choral tradition and set new standards of virtuosity and musicality. His professional female and male voices create a distinctive sound of great warmth and clarity. Although it has been refined over four decades, that sound has remained remarkably consistent, always responding to the emotional content of the words and music and alert to the subtle nuances of color and tonality. His orchestra of period instruments has been instrumental in the continuing series of oratorios by Handel, They are presenting worldwide.

Tickets for this concert are already on sale at the box office of the National Music Auditorium, in the web www.entradasinaem.es and on the phone 902 22 49 49, with prices ranging from 15 € to 40 €. From one hour before the concert can be purchased at the Auditorium box office entries last minute on a discount 60% for children 30 and unemployed (locations from 6 euros).

Exceptional oratorio
Since in 1719 He was named Artistic Director of the Royal Academy of Music, the main dedication of Haendel as composer in London was writing Italian operas, although in the years 30 also he began to compose English oratorios, activity was priority from 1740. According says Paul J. vayon: “Haendel had the first contact with the genre of oratorio in Hamburg, where he met his friends works Mattheson, Keizer and Telemann presented in the temples in close doctrinal relationship with the Sunday sermons. He went to Italy, to write two plays in the exuberant style cuasioperístico He cultivated in Rome in the first decade of the century. The haendelianos oratorios of London 1730 They had more to do with the Germans than Italians. Although they were destined to theaters, and not to the churches, They were written in English and choirs granted a much more dominant role than in Italy. Israel in Egypt is, essentially, a choral oratorio in which the strength of the vocals and the almost complete absence of solo arias perhaps point towards a collective ideal, national. With twenty choral numbers, of which eighteen are written for eight voices, a resource to polychorality is not equal in all the rest of the catalog of the composer and that at times seems to roll back the music of Gabrieli Venetian splendor, the arias and duets are, actually, irrelevant from the point of view as dramatic Haendel uses them as mortar to bind and fuse the great scenes.”