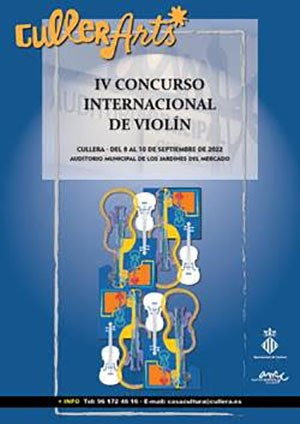 Cullera City Council organizes the IV edition of the International Violin Competition "CullerArts" 2022, to be held 8 al 10 of September, at Market Gardens Auditorium.

As in the three previous editions, the contest is open to the participation of violinists of all nationalities, with an age between 17 Y 27 years. For that, Contestants have a registration period between 1 February and 30 March 2022, both days inclusive.

The request to participate, along with the rest of the required documentation, detailed in the bases published by the City Council of Cullera, should be sent to the following email address: casacultura@cullera.es

Once the registration period is over, the day 6 April will proceed to the selection of contestants. The final list of violinists who will compete in Cullera will be published on 8 of April.

at the end of the contest, what will take place on the day 10 of September, the three finalists will attend with the symphonic program. They will be able to freely choose a concert from the repertoire made up of the following composers: Beethoven, Brahms, Dvorák, Mendelssohn, Paganini, Wieniawski, Tchaikovsky or Bruch.

The International Violin Competition “CullerArts”, which gradually aspires to become a benchmark event on the Spanish and international scene, Since its first edition, it has welcomed the participation of numerous violinists from Russia., South Korea, Greece, Bulgaria, Ukraine, Germany, Portugal, Singapore, Italy, Holland and Spain. an enthusiastic response, that not even the pandemic has managed to tarnish, keeping in constant increase and without interruption during the last three years.

In response to its growing consolidation, this edition provides an increase in the endowment of the different awards compared to previous editions:

further, five scholarships will be delivered, with a financial endowment of 600 euros for each of the five semi-finalists who do not reach the final.

One of the great attractions for the winner will be the invitation by five orchestras to perform a concert, throughout the next two seasons of its programming. The collaborating orchestras are: MIDDLE, Orquesta de Valencia, Extremadura Orchestra, Malaga Philharmonic Orchestra and the Balearic Islands Symphony Orchestra. Likewise, Cullera City Council invites the winner to offer a chamber recital, within the framework of the International Music Festival "CullerArts".

For more information, you can download the Competition rules Y Enrollment Request in Spanish e English.