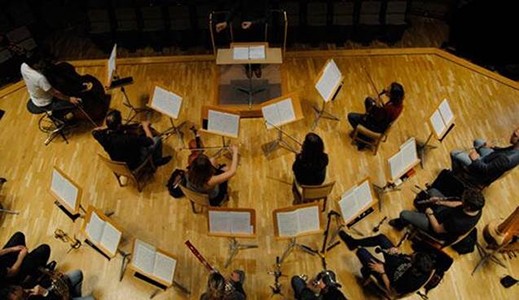 Canal Theaters the Madrid show, in programming Scenario Clece, IX Festival of the Ensembles, a sample of the best musical creation that is currently underway in Spain. Free entrance until full capacity, you can enjoy day 7 Y 28 October 4 November in the Green Room.

At the forefront of this project is the set PluralEnsemble, what, one more year, It offers a unique opportunity to listen to contemporary music groups highlights of our country occasion: Enigma Ocaz group of Zaragoza, Sonoro workshop Espai Sonor Ensemble Sevilla and Valencia.

The Festival presents to the public several generations of creators, stylistic trends and musicians, also allowing an interactive discussion between the audience and some of the performers and composers of the works programmed for the occasion.

PluralEnsemble is a specialized instrumental ensemble music of the twentieth and twenty founded by Fabián Panisello, its chief conductor. always seeking the highest quality interpretative, annually develop a stable season of concerts and tours, alternating the most demanding solo repertoire with works set.

He has made numerous recordings for various European radio stations (WDR, RBB, RNE, RF, ORF, RTBF or Polish Radio among many others), as well as recordings for seals Col Legno, Columna Música, To, Cervantes and NEOS.