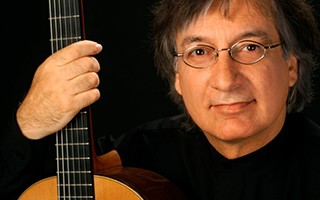 The XVIII edition of the Guitar Festival "City of Elche"We start tomorrow, with Slovenian Jaka Klun, at Cloister of San Jose at 21.30 hours free admission. This was the guitarist Last year's winner of the International Guitar Competition "Ciutat d'Elx" and despite its youth It has a great experience in competitions international. further, He has been taught by some of the most outstanding masters of the guitar as: Paolo Pegoraro, Stefano Viola and Alvaro Pierri, among others.

From twelve Jaka He has also participated in the composition, under the guidance of Professor Ambrož Copi. Your song call "The fear" It was conducted by the Youth Choir of the Music School Koper. Another remarkable composition is called “Color expressions“ for guitar solo, whose first performance took place in the second Biennial of Contemporary Music in Koper, 2010.

Thursday 21 of July, at Cloister of San Jose and with free entrance It will be the turn of two great guitarists Slovaks, Darina Jókaiová y David Hnat. In 2011 They decided to undertake a project together creating the group Guitar Duo Jókaiová-Hnat and despite his short career, They are known internationally, and its varied repertoire ranges music from different eras and styles.

On the other hand, Also on Thursday, they will start the master classes of the teacher Alvaro Pierri to 10:00 hours in the CEU Cardenal Herrera University Elche. The squares of these classes were sold the first day they were published. Likewise, Carmen Ros, Eduardo Baranzano, Ricardo Barceló o Andrea de Vitis will be other artists that can be enjoyed over the next day Festival.