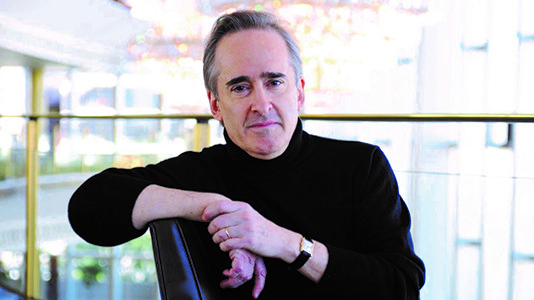 American director James Conlon will direct for the first time at the Castile Symphony Orchestra and León at the Subscription concerts 11, through a program that will address the ‘Symphony No. 3’ by Johannes Brahms and the ‘Symphony No. 3, ‘Renana’ by Robert Schumann.

The Symphony Orchestra of Castilla y León will offer its subscription concert next week 11, penultimate appointment of an extensive program of the Winter Season, started the past 7 January and will end on 20 of March, with six programs that have featured great works, soloists and conductors of international prestige, many of them that have been revealed as important discoveries when participating for the first time with the OSCyL.

In this sense, next week's concert will be conducted by American James Conlon, one of the most respected directors today, valued as one of the most recognized classical music performers and collaborating for the first time with the Symphonic Orchestra of Castilla y León. Conlon has cultivated a vast symphonic repertoire, operatic and choral, conducting virtually all major symphony orchestras in the United States and Europe, since his debut with the New York Philharmonic in 1974. In 1976 debuted at the Metropolitan and at 1979 in Covent Garden. Throughout his career he has collaborated with many of the opera companies, including the Teatro de la Scala, the Liryc Opera de Chicago and the Maggio Musicale Fiorentino. In Europe, Conlon has held several important positions, including Principal Conductor of the Rotterdam Philharmonic, General musical director of the City of Cologne and principal director of the National Opera of Paris since 1995 And till 2004. In 2015 was appointed principal conductor of the RAI National Symphony Orchestra of Italy.

Fertilizer program with Brahms and Shumann

Under the direction of Conlon, The Symphony Orchestra of Castilla y León will perform the program of ‘Las sinfonías del Rin’, taking this European river as the common thread that flows between the two symphonies of this concert, Johannes Brahms, written by the composer in the summer of 1883 en Wiesbaden, from his studio overlooking the Rhine Valley; and the symphony by Robert Schumann, the 'Renana’, which he composed in Dusseldorf at the end of 1850. Two works that, as elements that the river Rhine treasures, will show movements associated with the natural, under the artistic paternity of Beethoven, permanent referent, linking these two works and their authors.

The 'Symphony No. 3 in F major, on. 90"De Johannes Brahms (1833-1897) to which the director in charge of releasing it, Hans Richter, in 1833 apodó ’Brahms Heroic’Has been interpreted by the OSCyL on five occasions, being the last in the season 2017-2018 under the direction of Pablo González. The ‘Symphony No. 3’, structured in four movements, It is the shortest of the four written by Brahms and in which the dramatic aspects are most intensified. A composition that shows a great sense of conciseness and great balance, being novel at the time and complicated, both for the orchestras and for the public.

The next friday 12, It will be the third time that the OSCyL addresses the 'Symphony No. 3 in E flat major, op.97 ", “Mother”, by Robert Schumann, directed last time of season 2004-2005, by British director James Judd. The symphony was composed between the 2 November and 9 December 1850 in Düsseldorf and premiered on 6 February 1851 by the Düsseldorf Orchestra, under the direction of the author himself and reaping great success. As its title indicates, the work wants to be a tribute to the city of Düsseldorf and the Rhine, recreating its environment and its people. "Renana" consists of five movements and was created, in a fast-paced way, in just four weeks. Through this work, Schumann offers us a tour of different aspects of the city, His town, the river or the cathedral, uniting it all in its end, a last movement that places us on the edge of the Rhine, through a peasant dance, a real festival to conclude the work with joy and great optimism.