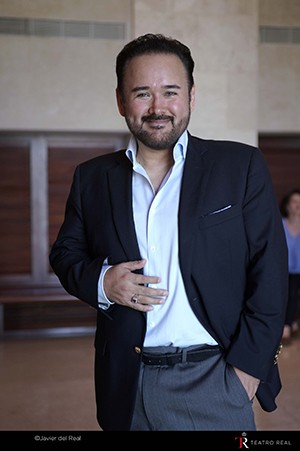 Since its debut at the Teatro Real in 2014, Javier Camarena He has conquered audiences performing three operas of Madrid Gaetano Donizetti very different dramaturgical profile and vocal ─Daughter of the Regiment, Bookmark Y Lucia of Lammermoor─, and one of Vincenzo Bellini ─I puritani─, the two largest bel canto composers, allowing Mexican tenor showcase the immense possibilities of his art: a voice large amplitude, beauty and plasticity, phrasing full of expressivity, an impressive virtuosity and vocal agility and an innate and natural musicality.

Now back Camarena, once again, with two very different composers and two papers fetish: naive and enamored Nemorino in dynamic production L'elisir d'amore, Donizetti, conceived by Damiano Michieletto; and passionate, spirited, irreverent and vindictive Gualtiero in the dark drama The pirate, Bellini, which will be staged at the Real between days 30 November and 20 from December.

Among these universes antagonistic dramaturgical, Javier Camarena offer a program melodismo and intensity in the Mediterranean Gran Gala 2019 The Royal Theatre, the next 13 of November, with pianist angel Rodriguez, devoted to arias and Italian songs and which will not fail, in the second part, a nod to the Spanish zarzuela.

GRAN GALA 2019 OF THE ROYAL THEATER

The time of the meeting

Ricciardo and Zoraida: 'If she evermore faithful to me ... what will never be the joy'

The pirate: 'In the fury of the storms ... for you with vain tears'

The host of Seville: 'Woman of black eyes'

Born in Xalapa, This Mexican tenor studied with mezzo-soprano Cecilia Perfect at the Universidad Veracruzana and graduated with Hugo Barreiro and Maria Eugenia Sutti at the University of Guanajuato. Awarded in competitions Carlo Morelli 2004 and Francisco Viñas 2005, he joined the International Opera Studio in Zurich before starting a career that has led him to the main stages of the world and which has worked with conductors such as Claudio Abbado, Marco Armiliato, Maurizio Benini, Bruno Campanella, Daniele Gatti, Fabio Luisi, Zubin Mehta, Evelino Pido and Franz Welser-Möst. He recently sang Ernesto de Don Pasquale at the Palais Garnier in Paris, nadir The Pearl Fishers in Bilbao, Spain, Edgardo Lucia of Lammermoor en la Bavarian State Opera de Múnich, Tonio Daughter of the Regiment at the Royal Opera House in London and Arthur I puritani Opéra Bastille in Paris. At the Teatro Real has sung in Daughter of the Regiment (2014), I puritani (2016), Bookmark (2017) Y Lucia of Lammermoor (2018).

Cuban origin and living in Mexico, this pianist and composer studied piano with Gonzalo Gutiérrez, conducting with Gonzalo Romeu and vocal repertoire with Enrique Jaso and Kamal Khan. Throughout its three-decade career you has been pianist Ramón Vargas, Rolando Villazon, Javier Camarena, Nadine Sierra, Joseph Calleja, Pretty Yende, Veronica Villarroel, Ailyn Pérez, Alfredo Daza, Kate Lindsey, Arturo Chacón and José Bros, with whom he has performed in venues such as the Palacio de Bellas Artes in Mexico, the Teatro Real in Madrid, the Baths of Caracalla in Rome, the Konzerthaus Berlin, el Kennedy Center de Washington, el Harris Theater de Chicago, the Opernhaus Zurich and London Rosenblatt Recitals. As a pianist Cuba Opera and the Opera de Bellas Artes, He has worked with Placido Domingo, Luciano Pavarotti and Anna Netrebko. She currently teaches master classes and workshops in Mexico, and chairs the College of Arts Vocal, institution specialized in the art of singing which is founder.

All donations from the Gran Gala 2019 The Royal Theatre will go to the Social program ─del part Royal Junior and introduces the youngest to the ópera─, and also the Social Hall, serving over a hundred minor from the ANAR Foundation, Foundation of Madrid Down Syndrome, Autism Federation Madrid, Spanish Federation of Parents of Children with Cancer, Foundation Victims of Terrorism (children), Social Action for Music and ActionAid, associations, All of them, nonprofit.