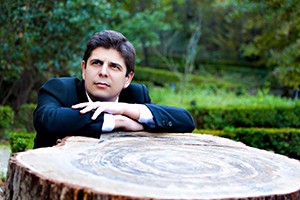 Javier Perianes arrives at one of the crucial appointments in his tour of the United States next 10 of March. His return to Carnegie Hall in New York. It will be his first collaboration with the director from Granada Pablo Heras-Casado, head of the Orchestra of St.. Luke’s, with a purely Spanish program that includes Las Noches en los Jardines de España by Manuel de Falla. This North American tour of 15 concerts (Fort Worth Symphony, Florida, Boston Symphony, St. Luke´s Orchestra, Atlanta Symphony y Chicago Symphony) confirms the increasingly common presence of the Spanish pianist on American stages, where he will return this summer with the New York Philharmonic (Vail Festival) and the Cleveland Orchestra (Bloosom Festival).

All within a season in which his international performances include appearances with orchestras such as the London Philharmonic, Frankfurt Radio, Netherlands Radio Philharmonic Orchestra, Prague Spring Festival, a month tour with various orchestras in Australia and New Zealand, as well as his recent performance with the Royal Concertgebouw in Amsterdam and Semyon Bychkov in the Ibermúsica series in Madrid with Beethoven's Emperor.
Within that aforementioned and prestigious cycle of Ibermúsica, Perianes will make his debut with the Vienna Philharmonic next 26 of June (season opener 16/17) with Concert No.. 4 from Beethoven next to Andres Orozco Estrada.

Previously, he 22 of June, will appear at the Granada Festival with the Royal Philharmonic Orchestra and Charles Dutoit with the Concerto in Sol de Ravel and paying homage to Falla and his Nights in the gardens of Spain on the centenary of its premiere.
National Music Award 2012, Javier Perianes has been described as "a pianist with impeccable and refined taste, endowed with an extraordinary sound warmth " (The Telegraph). His international career spans five continents, with presence in venues such as the Royal Festival Hall in London, Carnegie Hall in New York, el Théâtre des Champs Elysées in París, la Philharmonie of Berlín, Amsterdam Concertgebouw, the Great Hall of the Moscow Conservatory or the Suntory Hall in Tokyo.
It's from the season 14/15 , highlights several prestigious debuts among which include the Orchester de Paris, Washington National Symphony, San Francisco Symphony y BBC Scottish. Invited by many leading directors in the world, Perianes has worked with teachers as Daniel Barenboim, Charles Dutoit, Zubin Mehta, Lorin Maazel, Rafael Frühbeck de Burgos, Daniel Harding, Yuri Temirkanov, Juanjo Mena, Lopez Cobos, Josep Pons, Andrés Orozco-Estrada, Robin Ticciati, Thomas Dausgaard Y Vasily Petrenko.

Exclusive artist of the harmonia mundi label. His album dedicated to Falla, It is including Nights in the Gardens of Spain and a selection of pieces for piano, He was nominated for a Latin Grammy 2012. More recently it hits the market a live recording of the Piano Concerto Grieg with the BBC Symphony Orchestra and the maestro Sakari Oramo. The Gramophone magazine pointed:"You have to be really brave to record the Grieg Piano Concerto […] but the young virtuoso interpretation of Spanish Javier Perianes is a brilliance and boldness such that virtually erases the memories of the past ". Grieg's album received, among other awards, the exceptional seal of Scherzo, Gramophone Editor's Choice, as well as the Choc de Clásica and the Choix de France Musique.