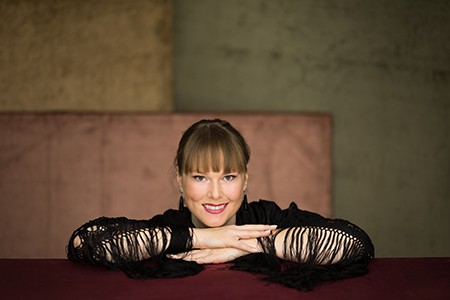 If Jessica Pratt in September, a reference to the string coloratura soprano today, season began 2019-2020 assuming the impossible challenge of playing all the female roles The Counts of Hoffmann –Olympia, Antonia, Giulietta and Stella at the Opéra National de Bordeux (France), in October back again on stage at the Euskalduna in Bilbao capital to get into the skin of the protagonist Lucia of Lammermoor a co-produced assembly between ABAO Bilbao Opera, the Teatro Comunale Bologna, the Teatro Carlo Felice in Genoa and the Slovak National Theater. Day functions 19, 21, 25 Y 28 October, Donizetti's opera returns to the schedule of the outstanding performer with a special flavor, "And it will match the function number 100 This iconic character that has given me so much joy ", as the singer says.

Jessica Pratt has taken his Lucia by theaters like the Metropolitan in New York, el Théâtre des Champs Elysées in París, La Scala in Milan or the Sydney Opera House, among many others. In Spain he will reprise next January at the Opera de Oviedo in July and achieved great success in defending the Palau de Les Arts in Valencia, to the point that has been distinguished with the prize to the best soprano of the season by the Friends of the Opera and Les Arts in Valencia. Pratt, He is delighted and grateful to the prize, adds that "In Bilbao I will sing the work in the original key and a new cadenza, something that I really wanted to do to continue to deepen the musical side of the opera ". Riccardo Frizza, expert in bel canto composer and musical director of the Festival Donizetti Bergamo, the lead from the podium at the Euskadiko Symphony Orchestra and Opera Choir of Bilbao.

Born in England and raised in Sydney, season 2019-2020 Jessica Pratt also await you I Puritani in the Opera Marseille, his return to Oviedo as Lucia, again I Puritani at the Teatro San Carlo in Naples and Lucrezia Borgia at the Sydney Opera House.