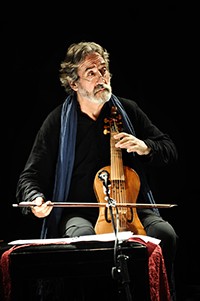 Two centuries of instrumental stroll through Europe. That suggests this program Jordi Savall leading his. The richness and variety of the Western legacy, their contact points and their disagreements are perfectly caught in this repertoire of dances, glosses and fantasies of Venice and Naples just after touring Spain, England, France and Germany in a coming and going of periods and styles, that the same stops at the Spanish vihuela viola in English, in the French lute in the key Italian. A color map, rhythms and harmonies with the ever imaginative style master Igualada.

Jordi Savall is one of the most versatile musical personalities of his generation. It gives to the world for over fifty years ago musical wonders abandoned in the darkness of indifference and neglect. Dedicated to the research of these ancient music, reads and interprets them with his viola da gamba, or as director. His activities as a concert, educator, researcher and creator of new projects, musical and cultural, place it among the main architects of the phenomenon of revaluation of historical music. He is the founder, together with Montserrat Figueras, los grupos musicales Hesperion XXI (1974), La Capella Reial de Catalonia (1987) y Le Concert des Nations (1989), with which explores and creates a universe of emotions and beauty projects to the world and to millions of music lovers. Con una participación Fundamental in the película Alain Corneau All matins du monde (Cesar for best soundtrack), an intense concert activity (140 concerts a year) and record (6 annual recordings) and creation with Montserrat Figueras his own label ALIA VOX 1998, Jordi Savall shows that early music does not necessarily have to be elitist and interest to an audience of all increasingly diverse and numerous ages. His enormous work in performing concerts and recordings is, in the words of critic Allan Kozinn in The New York Times (2005), a matter "not only music recovery, but rather creative resuscitation ". Throughout his career he has recorded and edited over 230 discs repertoires of medieval music, Renaissance, Baroque and classicism with special attention to Hispanic and Mediterranean musical heritage; a deserving production of multiple distinctions, as Midem Awards, International Classical Music y Grammy. Their concert programs have made music an instrument of mediation for peace and understanding between peoples and cultures and sometimes faced. She not in vain was named in the 2008 He was named "Ambassador of the European Union for intercultural dialogue", and together with Montserrat Figueras were designated the two "Artists for Peace" within the program "Goodwill Ambassadors" of UNESCO. Include its participation in the discovery and representation of Una cosa rara and buon cuore di burbero Il Vicent Martín i Soler. He also directed Le Concert des Nations and La Capella Reial de Catalunya in the representations of L'Orfeo by Claudio Monteverdi, the Farnace and Il Teuzzone of Antonio Vivaldi and Orfeo ed Euridice by Johann Joseph Fux.