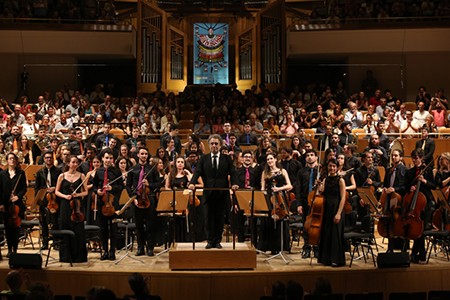 Last Saturday 22 of June, he National Music Auditorium He hosted the fifth edition (the above four, in June 2011, 2013, 2015 Y 2017) the musical marathon Only music!, biennial event created to celebrate Music Day. Organized by the National Broadcasting Music Center (CNDM), unit of the National Institute of Performing Arts and Music (INAEM), this edition presented 7 concerts, more than 500 interpreters, along the 13 uninterrupted hours of music, with Russian ballet Tchaikovsky and Stravinski central axis. The activities were divided between the Symphony Hall and the two extra spaces added in previous editions, the Hall of Tapestries and outdoor auditorium Square Rodolfo and Ernesto Halffter, attracting attention 10.594 Madrid, almost 80% gauging, many of them unfamiliar with classical music, enthusiastic following proposals scheduled.

In addition to the aforementioned concerts, Jazz mention that there Vermouth!, jazzy improvisations of musical excerpts from the Ballets Russes performed by outstanding soloists on the national scene that enlivened the food tasting mounted equipment for public. As on previous occasions, from midafternoon they were issued, live, on a giant screen on the street concerts by the National Orchestra of Spain and the National Youth Orchestra of Spain, delayed, the concert of the Symphony Orchestra of RTVE. Around midnight, the music of Haendel closed the day accompanying a fireworks display, Traditional finale of the most important event of classical music within the celebrations of the "Festival of Music".

shared project
As in previous years, the project has been possible thanks to the support of the City of Madrid, el Grupo RTVE (to which belongs RTVE Symphony Orchestra), the Community of Madrid Orchestra and the Symphony Orchestra of Madrid who have joined once again this unprecedented musical initiative in our country. further, acknowledge the participation of other units of the INAEM, such as the National Orchestra of Spain, the National Youth Orchestra of Spain and the National Music Auditorium own, to achieve it and open it to as many citizens as possible. the continued support of the media should be highlighted, especially Classical Radio, which he broadcast live three symphony concerts and RTVE, he recorded five soon to issue them in its program dedicated to classical music. Near 150 professionals enabled this musical marathon day will take place as normal, without incident among the large audience, which at all times he was as respectful as enthusiastic.

The press has said of the Russians Are Coming!:
“…And risk and delivery (quality is taken for granted) It is a symphonic marathon. He demonstrated by the National Youth Orchestra of Spain, which it gave a bright and moving version. Here he danced to death, as dreamed composer. Pons, widely applauded throughout the day, he obtained, at last, his biggest cheer. And it seemed to look as Diaghilev and outline lips uttered the immortal line, after the scandalous premiere of: This is exactly what I wanted” Paul L. Rodríguez, THE COUNTRY

“At a rate two years, "Music Only" has reached its fifth edition focusing on a five day symphony concerts, many other sessions "jazz vermouth" with jazzy improvisations on musical extracts Ballets Russes, and projections on the street seen inside auditorium. The project now measured forces with a more concentrated programming on previous occasions, but keep unchanged its popular ambition. As the day progressed, the capacity of the auditorium is gradually completed until the full house. In the final section, the usual closing the square and Ernesto Halffter Rodolfo, main entrance to the auditorium, with fireworks to the beat of the famous music for a time equivalent wrote Haendel ... National Auditorium, finally conquered after the invasion of the Russians and their music.”. Alberto González Lapuente, ABC

“Shortly before they gave the twelve o'clock Josep Pons went to one of the balconies of the National Auditorium. The teacher thanked, He wished it had been worth the effort of the whole day and said that after a day of drinking water was only wanting a beer. Surely he served ipso facto ... one day in which Pons was head five orchestras and gave it their best.” Gema Pajares, THE REASON

“…there was a kind of crescendo in the proposal of Josep Pons above concrete proposals for each concert. Pons more than fulfilled his feat, and the five orchestras responded with the success that is when you know (Musicians know) this is not a quote to the public. But something else.” Santiago Martin Bermudez. JOKE

“The conductor (Josep) Pons has done a really meritorious work. True, it was all music and ballet lacked "visual", but while "it is ridiculous ballet without music it does not happen the other way around", defends the director, who is convinced that the orchestras have contributed to forget the lack of movement because the public has been able to capture in the works "another beauty". And it takes quite right.” José Oneto, REPUBLIC