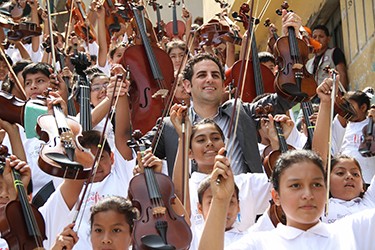 Juan Diego Flórez sings for the Right to Education and Dignity of Children.

Under the dome of Miquel Barceló, he UN Palace of Nations, the first will be held CONCERT FOR PEACE, coinciding with the World Day of Human Rights.

morning, World Day of Human Rights, there will be a beautiful concert in the Hall of Human Rights of the UN, under the dome of Miquel Barceló, with Juan Diego Flórez and a youth orchestra from countries on five continents (especially from Latin America) who are receiving education thanks to several foundations that use music as a vehicle for integration.

morning, 10 from December, to 18.30 hours the first ‘Concert for Peace’ will take place in the Human Rights Room of the United Nations Palace in Geneva.

Juan Diego Florez, Unesco Goodwill Ambassador, will sing with the South African soprano Pretty Yende, the egyptian soprano Fatma Said and Russian under Sergey Artamonov, and give a short speech.

The Spanish director Pablo Mielgo will be in front of the Harmonia Symphony Orchestra, formed mainly by young people from foundations that use music for the social integration of children and youth.

The concert, powered by UNOART FOUNDATION, with audiovisual production of MEDIAPRO and collaboration of TVE, will be offered live and delayed to 58 EBU-EUROVISION member countries. Subsequently it will be broadcast worldwide and will be released on DVD.