The King's Consort and Choir at the National Auditorium 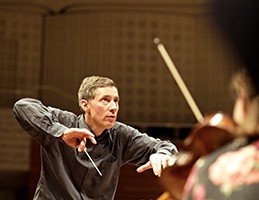 Although strictly speaking he wrote only one opera, Henry Purcell devoted himself to theater music throughout his career. Songs and instrumental pieces conceived as incidental music filled countless dramas of his time and at the end of his life, the composer left four works in the semi-opera genre, a hybrid between musical and spoken theater. King Arthur is, with the queen of the fairies, the most popular of these works.

An absolute specialist in Purcellian work, Robert King, He will offer it along with his ensembles and a cast that brings together some of the best English voices of the moment.

Considered one of the most important period instrument orchestras in the world. Founded in 1980 by Robert King; the orchestra The King’s Consort y el Coro de The King’s Consort, they have toured the five continents and their presence is common in almost all the countries of Europe, Japan, Hong Kong and the Far East, as well as North and South America. For more than three decades, The King's Consort has presented a wide range in their repertoire, since 1550 to the present day, in major music halls.

Notable seven appearances at the BBC Proms, re-enactments of the spectacular “Coronation of King George II”, the revival of the Venetian “Lo Sposalizio”, Bach's "Mass in B minor" and "St. Matthew Passion", Mendelssohn's "Elijah" across Europe, Performances of Purcell's "The Fairy Queen" in Spain and Great Britain, the inaugural concert of the Purcell year celebrations on BBC TV and Mozart's "Requiem" at the Alhambra in Granada. Other operas brought to the stage have been Handel's "Ottone" in Japan and Great Britain., Handel's “Exio” at the Champs-Élysées Theater in Paris and Purcell's “The Indian Queen” at the historic Schwetzingen theater in Germany. Other tours have included concerts and operas in Japan, Hong Kong and the Philippines, Mexico, Brazil and Argentina and across the United States and Canada.
Recordings of The King's Consort have been widely praised, have received many international awards and sold more than 1.500.000 of copies. The orchestra now records for the VIVAT brand and specializes in the music of Handel and Purcell; but its extensive catalog includes instrumental and choral music of composers from Albinoni to Zelenka, including Bach's "Mass in B minor", Rossini's "Little Solemn Mass", Twenty-five previously unreleased recordings of the complete Purcell Odes of his songs and his sacred music; This has made The King's Consort in the world's leading orchestra in playing this author. TKC is also renowned for its recordings of more than a dozen Handel oratorios and operas.. Other projects include the recording of sacred music of Monteverdi, ten volumes of the complete sacred music of Vivaldi, a recording of “The Coronation of King George”, Handel's "Ode to Saint Cecilia", "Requiem" by Michael Haydn (winner of the "Best Choral Recording" BBC Music Magazine) and the sacred music of Mozart soprano Carolyn Sampson with. Edited with a hundred CDs and more than one and half million sold, The King's Consort is one of the world's orchestras historical instruments recorded.