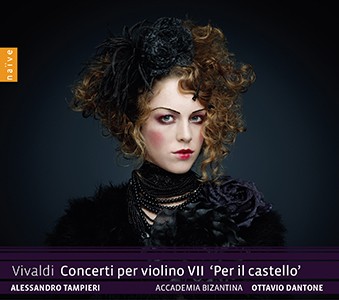 Under the title Violin Concertos VII – To the castle, the new album by Ottavio Dantone and Accademia Bizantina collected six of the fifteen concerts for violin collection, a month before his death, Vivaldi It malvendió in Vienna Count Vinciguerra Thomas Collalto (1710-1769), a Venetian nobleman who lived in his castle in Brtnice, Moravia (he castello that gives name to the disc).

In these late violin concertos, Vivaldi adapted to the demands of the galant style, Fashion from 1725, without losing any of his usual verve and imagination. With an extremely refined and virtuosic writing soloistic, Vivaldi fully exploits the broad expressive range of the violin, displaying a rich ornamentation and exceptional creativity.

Since 2011, Alessandro Tampieri, It is first violin and concertmaster of the Accademia Bizantina. After receiving unanimous acclaim from critics in 2018 with his solo recording of Concerts for viola d'amore (Volume 56), Alessandro Tampieri though with suma Violin Concertos VII – To the castle the distinguished violinists list Collection The Vivaldi Edition Naïve, in which they include performers such as Fabio Biondi, Riccardo Minasi, Dmitry Sinkovsky o Enrico Onofri, among others.