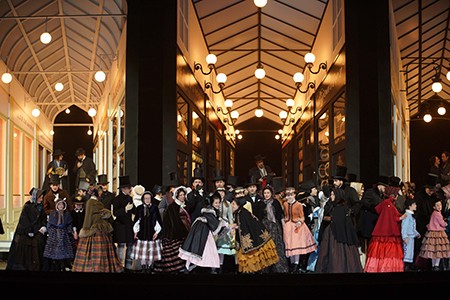 He Teatro Real It approaches the end of the year with the hope of returning to bring opera to all audiences thanks to the live broadcast of Bohemian, Giacomo Puccini, the next 29 from December, AVE trains circulating this afternoon.

This is a pioneering initiative that Real Theater will be carried out in collaboration with Renfe Y Telefónica through the application PlayRenfe, which give travelers the opportunity to AVE - in the Madrid-Seville and Madrid Valencia trips, in both ways – to share the experiences of the protagonists of Bohemian, in real time, while traveling 300 km/h. and the device prefer.

The HD signal directly travel from the Royal Theater to train two ways: satellite and through mobile network 4G, allowing for the first time an opera to be relayed live on a high-speed train.

Connectivity travelers inside trains is achieved via WiFi, with an access point and two antennas on each car. Within each train it has installed a local area network speed 1Gbps giving access to the server; so travelers can enjoy Bohemian live on TV channel Live TV application PlayRenfe.

Viewers who do not travel, may be connected to the relay's profile Facebook Teatro Real, the link www.labohemeendirecto.com and they can share their views and experience in the conversation with hashtag #LaBohemeEnDirecto.

In the latest edition of live opera Teatro Real, last July, con Madama Butterfly, Giacomo Puccini also, the scope of the retransmission in the Teatro Real Facebook channel reached more than 900.000 users, exceeding the figures of the previous retransmissions I puritani Y The Flying Dutchman, and Twitter the hashtag #MadamaEnDirecto fue trending topic national broadcast throughout.

Pablo Carignani is the musical director of this renewed proposal for the work of Giacomo Puccini (1858-1924), which features the prestigious British director Richard Jones scene and set and costume designer Stewart Laing. The assembly raises the opera as a succession of scenes of the Bohemian life presented to the viewer without concealing jobs backstage which normally develop technical backstage. A) Yes, the audience sees how the sets are changed, how different devices are used to achieve theatrical effects and how props pile up in the wings.

Madrid December cold Parisian winter transport us, tinged with melancholy, to accompany the truncated love aspiring poet Rodolfo, played by tenor Stephen Costello's, y la sastrecilla Mimi, Anita Hartig voice. With them, The soprano also Joyce El-Khoury and baritone Etienne Dupuis, They give life to Musetta and Marcello, respectively. The death of the female protagonist acts as a trigger for an initiatory path Bouncing wantonness and youthful dreams to reveal the strength and importance of real life.

Musical beauty, the dramatic effectiveness, Orchestral own motives and emotional narrative of the Italian melodrama make Bohemian one of the most beloved operas.