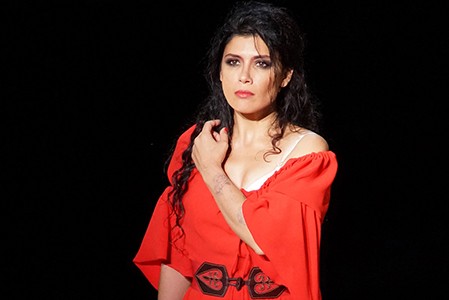 Few people have such an affinity with the vocalism of the Italian mezzosoprano Annalisa Stroppa as the protagonist of Carmen Bizet. He has sung in various scenarios since he debuted in 2011 en el Teatro Sociale di Trento (Italy) to resume at the Opéra-Théâtre de Limoges (France), Bregenz Festival (Austria) or season Alfredo Kraus of Las Palmas, always it is hailed by critics and the public. He explains, He is delighted to return to Spain, “even more so with such a fascinating character as the Gypsy of Bizet and assembly of Calixto Bieito, full of challenges for the performers”.

Brescia singer stresses that, for her, this myth represents Andalusian "a woman of exceptional modernity; It is consistent with his ideas, a free being who believes in everything he does and follows its own rules to the bitter end, even to the point of sacrificing his life. Is a character who has many facets, all the complex and fascinating time. We should not be the stereotypical idea of ​​the femme fatal cigarrera, because Carmen is much more than that; is a strong and vulnerable at the same time be and, definitely, candy artists we like to live intensely the emotions of the roles we play”.

And if the vocalism of the paper is to him as ring to the finger, considers that its affinity with the character so much about as a woman and interpreter.

The work will be offered at the Teatre Principal de Palma, In mallorca, the days 1, 4, 6 Y 8 of March, with the Valencian Manuel Coves on the podium ante Symphony Balearic Islands.